Share All sharing options for: The Size Factor: Miguel Torres vs. Takeya Mizugaki 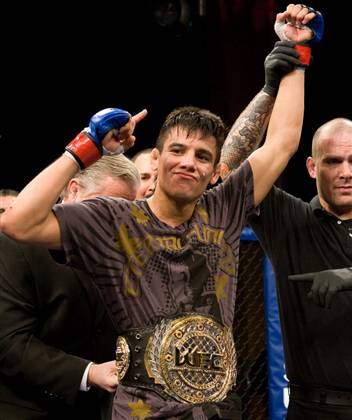 Besides Bellator and Dream events this weekend, there is one other happening Sunday night, and that's WEC 40 from Chicago.  Of course, the main dish will be the bantamweight title fight between Miguel Torres, the champion, and Takeya Mizugaki, a veteran of Shooto and Cage Force.  In his coverage of the main event, Michael David Smith points out one of the reasons why Torres is so dominant at 135:

I also mean that Torres is much taller and has strikingly longer arms and legs than anyone else who fights at 135 pounds. That was very obvious on Friday, when the WEC brought together four of the best 135-pounders in the world for a press conference promoting Sunday night's WEC 40 event.

The height and reach difference between Torres and the other three -- his opponent, Takeya Mizugaki, plus Jeff Curran and Joseph Benavidez, who will square off in the co-main event -- was more apparent than their listed heights. Torres is listed at 5-foot-9, Mizugaki is listed at 5-7, Curran is listed at 5-6 and Benavidez is listed at 5-4.

But Torres has something of a stooped posture, and I think the real length of his frame is more like 5-foot-10 or 5-11. He also has long arms and legs, meaning the advantage his stature gives him in the cage is significantly greater than his two-inch height advantage over Mizugaki would suggest.

Torres is so skilled that he would likely be quite successful without the advantage that his length gives him.  However, I attach a lot of value to size, whether it's at bantamweight or heavyweight. Torres maximizes his length advantage with a dynamic striking game that emphasizes kicks. The champion's bottom game is dangerous enough that he worries little about being taken down and, thus, throws kicks at will. If the fight does hit the mat, he's able to threaten with submissions from his back.  No doubt, his frame aides him on the ground as well.

In viewing some footage on Mizugaki, it's evident that he likes to push the pace of fights - much like the champion.  He possesses some vicious ground striking and is generally a dominant fighter when in top position.  Mizugaki has demonstrated some decent punching power while standing, but has also shown a less than iron chin.  Torres can definitely hurt him standing as I think his standup is more formidable on the whole.  While Mizugaki likes to rain down punches from top position, Torres' jiu-jitsu will make getting there and then staying out of a submission challenging.

All in all, Mizugaki appears to be a game opponent who shouldn't be overlooked, but this is the champion's fight to lose.  Mizugaki has been training with larger guys to prepare for the upcoming match.  However, it's doubtful than any of them can accurately replicate the skillset of Miguel Torres.