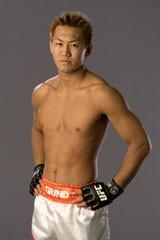 Yushin Okami out of UFC 98 due to torn ligament. Dan Miller will fight an awesome replacement challenger. Name will be released ASAP.

A change has been made to the upcoming card for UFC 98 as Yushin Okami has been forced off the show with a torn ligament in his knee. Team Quest fighter Ed Herman has been tapped as a replacement to face New Jersey native, Dan Miller, as confirmed to MMAWeekly.com on Thursday by sources close to the fight.

The change of opponents was confirmed to MMAWeekly.com late on Thursday by sources close to the fight.

Chael Sonnen was set to face Wilson Gouveia at UFC 102 in late August, but will instead opt for the earlier fight in May, although nothing rules him out completely from fighting again later this summer.