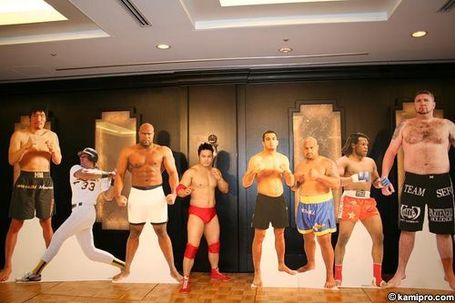 In what may be the greatest news in the yet young history of Mixed Martial Arts, a catchweight tournament "Super Hulk Tournament" has been added to May 26th, 2009's DREAM.9 event. It's a shame that this tournament, which is being called "the tournament to end all tournaments" will overshadow the second round of DREAM's catchweight ("featherweight") tournament, but it does, and how. Here is the line up, courtesy of Nightmare of Battle

That's right: the man who outed the steroid problem in baseball, who famously played a ball off of his abnormally large dome to cost the Texas Rangers a home run, will reportedly fight Hong Man Choi in what would far and away be the greatest freak show match in this history of MMA. I say "reportedly," as I have great doubts about Canseco's involvement in this tournament. I'm sure he could use the money, but he's not promoting anything at the moment, and let us not forget the pounding he took in an exhibition boxing match against Vai Sikahema. What business, then, would Canseco have stepping into a ring with a K-1 fighter?

Perhaps that match won't happen. Perhaps it's all just a publicity stunt where Jose Canseco is much more popular in Japan than I imagine him to be. Or perhaps Minowman will just wind up fighting the seven cardboard cut outs. I'll take the cutouts by heelhook, round one.

Additionally, it looks like Gegard Mousasi will be moving up to heavyweight a bit more quickly than he had planned, facing another K-1 veteran in Mark Hunt. It's interesting to me that Moussasi would fight on the same event where his vacated Middleweight title will be contested, and while a title defense against Jason "Mayhem" Miller would have been compelling, Mousasi's move up, at a time when he seems to be at the top of his game, is at least equally compelling. Hunt, in his most recent fight, was knocked out by Middleweight fighter Melvin Manhoef, who took the fight on short notice. Prior to that contest, Melvin was forced to submit at the hands of Mousasi. Obviously, that means Mousasi will beat Hunt via MMA Math.

Also of note is the return of Sokoudjou to Japan, where he fooled everyone into thinking he was a legitimate contender seemingly legitimized his place in the Light Heavyweight division, knocking Ricardo Arona out after having done so to Antonio Rogerio Nogueira at PRIDE 33 in Las Vegas, NV. He'll take on Jan Nortje, who most recently upset the homecoming of Bob Sapp, defeating his fellow tournament participant on the Strikeforce at the Dome event in Tacoma, WA in 2008. The rest of the (finalized?) DREAM.9 card is as follows:

art via nightmare of battle.