Share All sharing options for: Revamp the Vault, Please 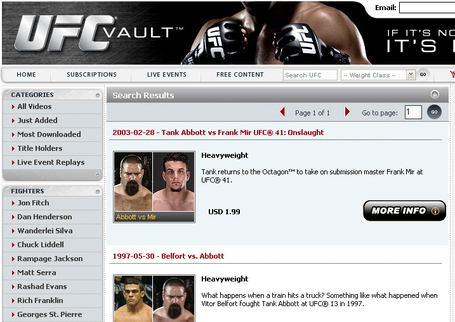 The UFC Vault is an invaluable resource, especially for someone like me.  Having a library of footage proves invaluable to a gambler or someone working on some sort of referee project (help still needed, we're almost done).  Suffice it to say, I use the Vault on a very regular basis.

Unfortunately, the site blows and sucks at the same time, to put it mildly.  Over at Sack Mike Goldberg, I wrote up this list of problems:

UFC Vault users out there, are you having these same problems?

UPDATE: Nate just pointed something out to me.  Go to http://video.ufc.com and click on "Subscriptions."  They aren't being offered anymore.  Terrible, terrible move.  Once my expires, I won't be paying $1.99/fight.

UPDATE 2: Conversation I had with live support on the subject: