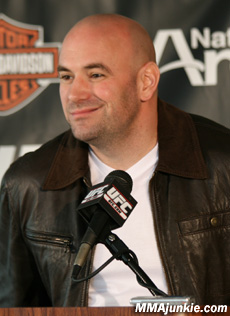 The UFC is responding to the scandal over Dana White's video blog by scaling down his public persona and interaction with the media.  According to Dave Meltzer there will be no more video blogs, less stuff with the press, and no reality show.

The war over the word "faggot" has completely distracted everyone from the main issue here, which is the way Dana White responded to Loretta Hunt doing what he thought was an unfair story.  Loretta wrote a story with quotes from anonymous managers to support the idea that it was wrong for the UFC not to let them backstage.  She contacted the UFC for their side, but of course they didn't give her anything because Sherdog is on the "banned" list.  Then she puts together a story that comes off one-sided, and Dana White goes nuts.  This entire thing could have been avoided if they ran their media department professionally, called Loretta back, and gave her their side of the story the way every other serious company would.

White slammed anonymous sources, but realistically speaking, would you give your name if the guy in charge of your destiny had a temper like the one we saw on the video blog?  The UFC controls over 90% of MMA revenue, if they blackball a manager, his career in the sport is effectively dead.  There was very good reason to remain anonymous.

The real lesson they should have learned is not to operate their media department Soviet style.  By picking and choosing "acceptable" journalists and boycotting the rest, they created a media situation where they either get ridiculously favorable puff pieces or complete hit pieces from banned press.  Dana rapidly turned himself into a Nixon-style figure with press friends and enemies, mostly the latter.

Now that newspapers are dying, these UFC events have very few journalists covering them.  It's the same group of regulars, you hear them at every press conference, and it creates a kind of backslapping friendliness that undermines healthy coverage of the sport.  Loretta deserves all the criticism in the world for appearing in that ridiculous Lindland documentary, but the response shouldn't be to ban her and go after her personally if she gets something wrong.

White backing away from the public eye is a boon in the very short term, and a huge loss in the long term if he stays out of the public eye.  People that want a PR firm handling things in a professional manner for the UFC really don't grasp that this is the sport of fighting, and that the only attention it has is because White has pounded the pavement to demand it.  When Kimbo Slice was exposed, and various mainstream press tried to tie his failure to MMA, Dana White did the work of an army to try to save the sport from that association.  A sport like this needs a loud and passionate advocate that won't take no for an answer.