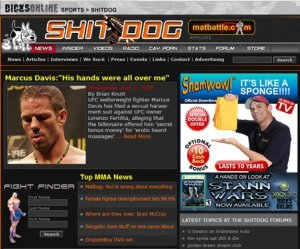 I didn't post on this yesterday because the Dana White Vlog controversy was eating up all our bandwidth but I wanted to share because stupid bully laywers are a pet peeve of mine.

Here's the tale for those who missed it. Fightlinker put up this site as an April Fool's Day Joke. Later that day the crack legal staff at Crave -- Sherdog's corporate parents -- sent FL a cease and desist letter. I guess where they live it's April Fool's Day all year round.

We put a decent amount of work into our Shitdog parody, but Sherdog took it several steps further: they PAID a lawyer to put together this prank! For them to put that much time and effort into this makes us here at Fightlinker feel truly appreciated - we pranked Sherdog good, and they pranked us right back in epic fashion. Well done!

The basis of any good prank or parody is that you try to make the joke as realistic as possible, and Sherdog achieved this with a full 3 page letter from their legal counsel at Crave. We’ve already seen what one of these looks like before, and it appears pretty legitimate to the untrained eye. Fortunately for us, we have a pretty intimate understanding of the legal concepts known as fair use and parody so by the end of page one we realized that our leg was being pulled.

Again, my hat is off to Sherdog for putting so much effort into this. I’m glad their lawyer had enough of a sense of humor to play along too. Most decent legal eagles would not be willing to attach their name to such a frivolous and baseless document - I mean what would happen if people actually thought this was real???

The legal precedent on this is crystal clear thanks to Roy Orbison, the 2 Live Crew and the Supreme Court so Fightlinker doesn't have much to worry about. But Crave might want to reconsider their choice of law firms.

You don’t officially get harassed by lawyers until the letters come by, so this morning was an especially pleasant surprise to be reminded how humorless Sherdog really is. They want us to surrender any and all profit we made from the whole April Fools day joke. Sure, you can have it. How does one write a check for zero dollars again?