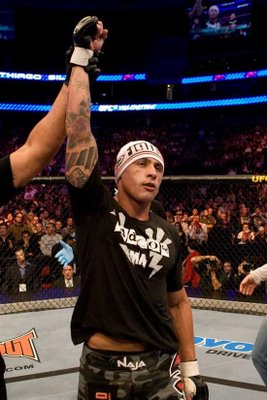 Sources close to the organization have informed MMAjunkie.com (www.mmajunkie.com) that "The Dean of Mean" and Siva have verbally agreed to meet at the Aug. 29 event.

Bout agreements are expected to be finalized shortly.

MMAjunkie.com originally learned of the planned Thiago Silva vs. Griffin matchup in March, but those plans were scrapped today in favor of the former light heavyweight champ and "The Ultimate Fighter" winner facing off with current UFC middleweight title holder Anderson Silva in a 205-pound contest.

This is a pretty evenly matched fight.  A lot of people expected Jardine to draw Anderson Silva, but the UFC threw everyone a curveball.  With both guys coming off losses, it gives them a chance to get back into the thick of things at the top.

Stylistically this is a good fight for Jardine, and likely another frustrating outing for Silva, who couldn't figure out Machida in January.  Jardine isn't the same kind of mystery, but he won't stand in front of Silva and slug it out.  It should be a good fight.

The odd men out so far are Shogun and Luis Cane, so many are speculating that a fight between the two will be announced soon.  There are other possibilities however for both men, including Rich Franklin and the loser of the UFC 98 title match.  I'd like to see the two fight, it's a good test to see how good Cane really is, and whether or not Shogun is really back.