What Makes Pacquiao vs. Hatton Great

Share All sharing options for: What Makes Pacquiao vs. Hatton Great 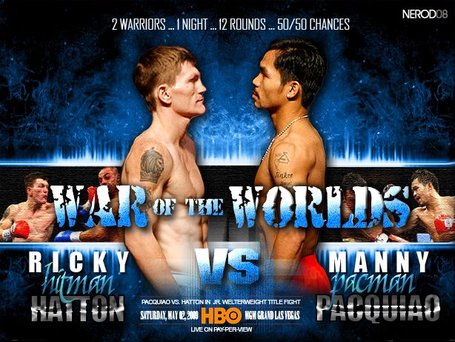 My good friend David Sauvage takes a stab over at Eastside Boxing:

The oddsmakers think Pacquiao’s speed will trump Hatton’s pressure. It’s true we’ve never seen Pacquio challenged by anyone other than a boxer, which Hatton certainly is not. Even Morales, when he beat Pacquio, played boxer out of necessity.

But there’s something in Hatton’s favor, something big. The sheer size of the man, naturally fighting ten pounds above Pacquiao, won’t neutralize Pacquiao’s speed, but will mitigate its effect. Hatton can’t dodge Manny’s best shots, but he can absorb them like no one before.

And come right back.

Hatton’s a rare combination of grit and style. Maybe it’s the Manchester in him, urban roughness yoked to English charm. He barrels at you, but his barreling has cunning. When he rips a body shot under your ribs it’s like he knows, on some Darwinian level, the exact shape of a your innards, the better to eviscerate you.

What to say of Pacquiao, the best fighter in the world, whose resume has on it every big name within the conceivable radius of his weight, progressing all the while? Unlike those great ex-sluggers before him, Morales and Barrera, Pacquiao hasn’t shifted to boxer to attain his immortality. He has merely incorporated boxing to structure his slugging. It has made him more ferocious, by making him more exact.

But it’s the so-called intangibles that make this fight so damn exciting. It’s the spirit of these men.