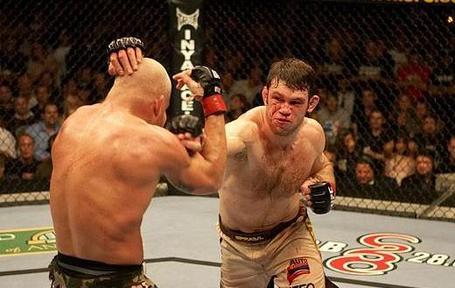 Promoted to the front page from the FanPosts by Chris Nelson. I guess Dana wasn't joking about giving Anderson a serious challenge at 205.

This is a great match up and a much-needed test for Anderson Silva, but this is also a huge test for Forrest Griffin. Forrest will be coming into the fight having just lost his title [not to mention coming off hand surgery - ed.] but still regarded as a top ranked light heavyweight and pound for pound fighter. I see Silva being better in almost all aspects of the game but Griffin is one of the biggest if not the biggest light heavyweight in the UFC. My predicition: Anderson Silva via 3rd Round TKO.

UPDATED at 1:29 PM by Chris Nelson: We're hearing conflicting reports on this right now, so take it with a grain of salt for the time being. Junkie has broken stories with their "sources" in the past, but someone close to Forrest just posted on the UG that Forrest has been in contact with him and this fight is absolutely not happening.

Ultimate Fighting Championship president Dana White made good on his promise to land a significant fight for suddenly under siege middleweight champion Anderson Silva, telling Yahoo! Sports on Tuesday that he had signed a deal for Silva to face ex-light heavyweight champion Forrest Griffin in the co-main event of UFC 101 in Philadelphia on Aug. 2.