Quote of the Day: God, I Love Kevin Randleman Edition

Share All sharing options for: Quote of the Day: God, I Love Kevin Randleman Edition 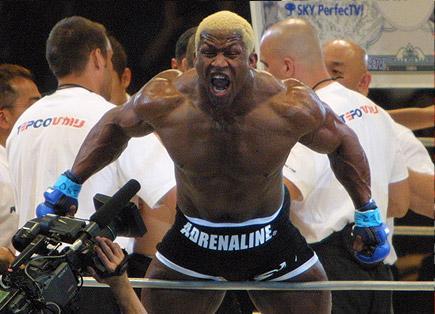 "I'm a fucking man and no one will ever question that because I am a man before I am a fighter and to have some pussy that sits behind a computer all day question my manhood pisses me off...This shit didn't get under my skin, but it's funny how most of these so-called experts have never been punched in the face. Hell, most of them have never had a fight before. I've been doing this shit since before half of them motherfucker's knew what the UFC was and now they're trying to call me a pussy,"

"I want this dude and any so-called journalist that talks shit about fighters to step to me when they see me at an event and let me know that they are the guy that printed an article like this and I will spit in his fucking face...I'm not Rampage. I will go to jail for beating your ass. No one will ever call me a pussy to my face and I bet this fucking guy wouldn't talk none of this shit if he saw me in person. If he told me some shit like that to my face, I would spit in his face and I wouldn't care if he had a 270-pound monkey with him because I'm a gorilla. I earn my respect every morning when I get up and go to the gym and I'm not going to be disrespected by any man, especially one that has never had a fight before in his life!"

-- Kevin Randleman, reacting to news there were unflattering or critical comments on the Internet about his decision to decline a proposed fight with Rafael Feijao Cavalcante.

This behavior is obviously nihillistic, dangerous, reckless and self-destructive, but in a strange way I almost admire it. I knew men like this in the Marines and while their behavior was a struggle to contain, their constant willingness to throw caution to the wind was still rooted in bravery. It's obviously fearlessness (and unbridled aggression) to an unhealthy degree, but fearlessness just the same.

UPDATE: Jesus, some of you guys are missing the point about this post entirely.

Am I promoting what Randleman has said as laudable or that street violence in general is a way to adjudicate disputes? Well, of course not. That is patently absurd and the posting of this quote has nothing to do with the promotion of Randleman's particular if eccentric worldview. I do not write in this space on high alert where I am constantly concerned that my mission is to write about and only write about those aspects of the sport that make MMA appear more palatable. Some of what makes up this sport is ugly and sometimes I like talking about it. That's it.

The reason I posted this - as I previously stated - is because in my time in the Marine Corps I ran across men who shared similar perspectives to Randleman and they made a very large imprint on me. I remember them all very fondly. But that imprint cut both ways. I was forced to come to grips with the fact that their aggression and unwillingness to make prudent decisions could often very negatively affect their life. But I also saw their indomintable spirit help them persevere through terribly traumatic or dangerous situations. I was then and still am today amazed at how their willingness to commit to certain ideals would enable them to overcome and gut through exceptionally difficult circumstances. The tragedy about the matter is not that they can be aggressive and stubborn about pushing back at the world when it pushes against them, just that they can't seem to tell when there's no reason to push back.

But at its core it is bravery and it is fearlessness. I do not judge either quality in people (deeply flawed or otherwise) by their origin or what enables those qualities to exist. I evaluate someone's bravery by watching it occur. There's nothing brave about threatening journalists nor is it even borderline professional. Of course Randleman is completely in the wrong about that. But I don't begrudge him the engine of his decisions even if he knows no limits. Is it unfortunate? Yes, but not in totality. It's a complicated identity and I am only recalling the parts about it I find favorable.