Snapshot of the Day: Fedor vs. Aoki

Share All sharing options for: Snapshot of the Day: Fedor vs. Aoki 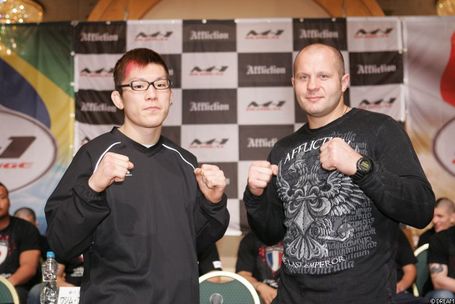 Affliction and M-1 held a press conference today in advance of tomorrow's DEEP/M-1 Challenge show. Fedor Emelianenko and Shinya Aoki shared the same space for the first time since their Sambo exhibition match was announced; Tom Atencio was also in attendance. I'll add more photos and notes from the presser in the extended entry as they become available. 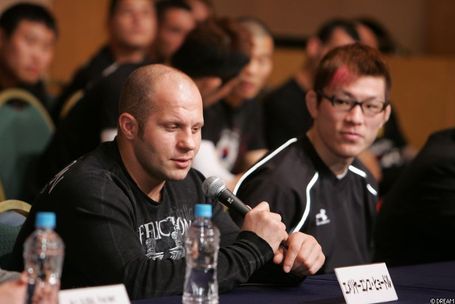 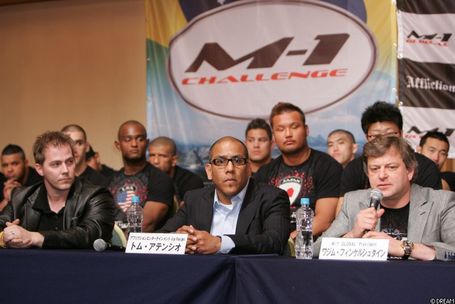 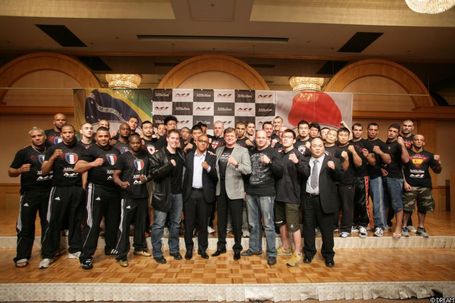 - When asked about his next fight, Fedor passed the microphone to Finkelstein, who said they are in negotiations for a fight in July/August, possibly to be held in Japan. They are currently negotiating with the Japanese side.

- DEEP boss Shigeru Saeki said that Japanese fans have not been interested in M-1 Challenge in the past, partly because the Japanese teams have not fared well, but he thinks that the match between Fedor and Aoki will change that.

Aoki said some pretty funny stuff as well, but I'll wait for good translations so as not to step on his punchlines. 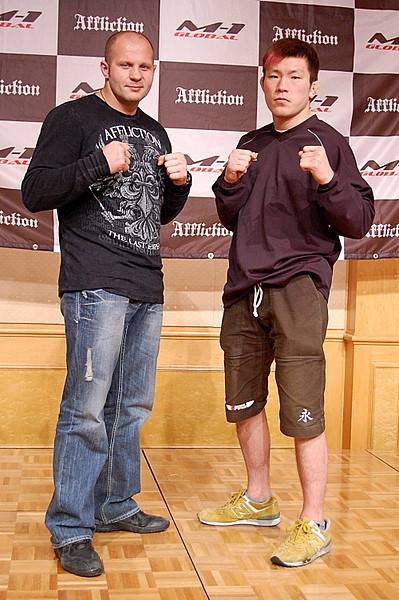 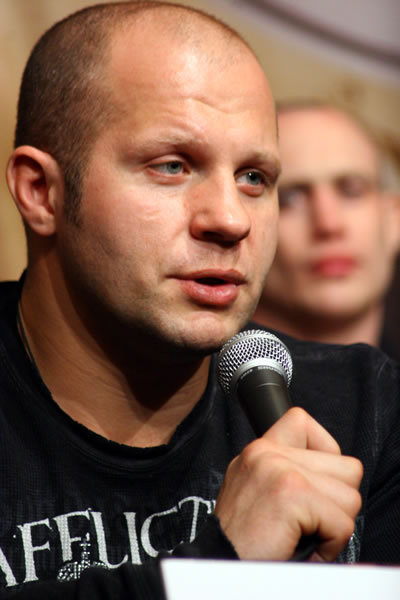 Update from Nightmare of Battle:

DREAM EP Sasahara, who was present at the press conference, said that while there are many hurdles to cross he would like to negotiate for Fedor to fight in DREAM on July or August and also on NYE. Since the Affliction staff is also in Japan he feels that this is an opportunity to negotiate.
. . .
It seems that Aoki didn’t get much attention. He was sitting at the side with a frozen expression. The rules of the fight are still not set.
. . .
Fedor said that he has seen some of Aoki’s fights and he thinks that Aoki is one of the strongest fighters. Receiving this praise, Aoki said that he’s happy and also embarrassed. When Aoki saw Affliction’s Tom Atencio (who was present at the press conference) he jokingly said: “If you give me an Affliction t-shirt I will fight with all of my might”.