Share All sharing options for: Minimizing Risk in MMA Can Incur Real Costs 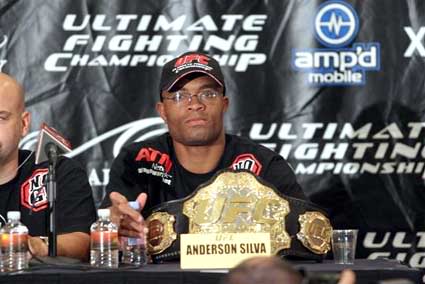 We're more than a week removed from the much debated Anderson Silva vs. Thales Leites title fight.  The ridiculous generalizations spawned from the affair are disconcerting to say the least.  Some feel that those who wanted Silva to work harder for a finish could only be ill-informed, "bloodthirsty" newcomers to the sport of MMA.  Similarly, some on the other side have levelled outlandish claims in an attempt to refute others who saw something appealing in Silva's performance.  I can't say that I'm surprised by ill-conceived and uninspired arguments, but they're irritating, nonetheless.  It doesn't matter the situation.  If you're supporting a sport with your enthusiasm and money, you have a right to air your grievances, whether it's with your voice, your dollars or both.

Although combatants on both sides of the issue have cooled down, there are still some questions surrounding Silva and the less than aggressive strategy he employed against Leites.  Jake Rossen makes several salient points regarding the roles of fighters and fans alike:

Silva -- or any fighter -- isn’t at blame. They do what’s appropriate in the rules. If he had gotten a point deduction for passivity, perhaps the fight would have played out differently. Better: Since Leites was told to stand up after flopping to his back, where’s the fairness in forcing Leites to play Silva’s game? If Silva didn’t want to engage standing, why not bring him to the mat in the same way Leites was brought to his feet?

None of this happened, of course, and Silva was allowed to cherry-pick only the most opportune times to land strikes. The fight is almost MMA’s version of "The Blair Witch Project," hailed as brilliant minimalism by some and an eye-gouging disaster by others.

There’s no accounting for taste. And if Silva ends his next bout with a vicious knockout, this will all be forgotten. But if his stature in the sport now compels him to compete with no momentum and no aggression, seeking only to preserve a sterile legacy, then observers can do worse than simply deduct points -- they can deduct revenue.

An athlete competing to win in a way that's most conducive to the individual's career is hard to fault.  We're talking about the highest level of MMA where even the largest of underdogs is able to inflict significant, possibly long-lasting, damage to the body of his favored opponent.  With this in mind, it's hard to expect any fighter to throw caution to the wind in attempt to score a highlight reel finish.

The most vexing variable in the Silva/Leites equation is Anderson Silva, himself.  He's faced the best that the UFC middleweight division has to offer, and he's dispatched all comers in impressive fashion except for his last two challengers.  In fact, the last two men to face Silva, Patrick Cote and Leites, are at the bottom end of competitors - from a body of work perspective - to challenge middleweight champ.  Coincidence?  I'm not sure, but it's hard to believe that Leites presented such a danger to Silva from his back that the only viable option was to wait for him to stand.

Silva is very much a victim of his own track record.  Significant deviation from the aggressive tendencies of old will be met with a tepid fan response at best.  In short, if Silva wants to earn the big paydays and cement his legacy as the best ever (two career goals that seem to be of great importance to him), he really has to do more that win the fight.  He has to win over the fans, something Silva hasn't excelled at as of late.  Some may contend that this isn't fair; MMA is a sport that shouldn't be perverted by seemingly non-sporting aspects.  This is a respectable postition that somewhat ignores reality.  Sports are only viable if fans exist.  The steep costs associated with the loss of fans are nothing to minimize.  Even someone who holds the purity of sport in high regard like myself understands that the sport must also appeal to as many fans as possible.  I know this fact isn't lost on Dana White and the others charged with piloting the UFC.