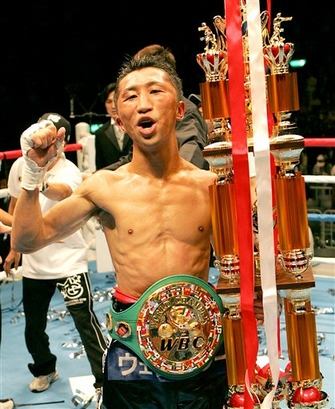 This is the first in what will hopefully be a regular series here on Bloody Elbow, a place to gather up the myriad notes and bout announcements from the Japanese scene every few days (or weekly, as the news dictates). I hope you dig, and feel free to let me know about anything I may have overlooked.

- Popular 6-foot tall JEWELS fighter / ex-dominatrix Yuko "HIROKO" Yamanaka (6-1) will face the Josh Barnett-trained Shannon Hooper (0-2) in an openweight bout at the promotion's "3rd Ring" show on May 16th. I've yet to see any tape on "HIROKO," but from what I hear, I wouldn't be surprised if Strikeforce was offering her a bundle of money this time next year. Prized prospect Shizuka Sugiyama (2-0) will also be in action, facing a member of Joachim Hansen's Team Hellboy named Celina.

- Pancrase added three fights to its June 7th card, which features the return of Sengoku lightweight champ Satoru Kitaoka. The first ever Flyweight King of Pancrase will be crowned in a bout between Mitsuhisa Sunabe (8-5-3) and Takuya Eizumi (5-1), the company's #1 and #2 ranked 127-pounders respectively. In a match-up of recent "King Mo" victims, Light Heavyweight King of Pancrase Ryo Kawamura (9-4-2) will face fellow Sengoku vet Yukiya Naito (15-5-2) in a non-title bout. Meanwhile, Seiya Kawahara (6-2) moves back to bantamweight following his Sengoku Featherweight GP opening round loss to Nick Denis; he'll square off against Tatsuya So (3-2-1)

- Megumi Fujii (16-0) has a new opponent for Shooto's massive May 10th show. Japan-MMA had originally reported that "Mega Megu" would face an unknown Korean fighter named Kim Don Hee, but now says that Hee is injured and has been replaced by Chu Won Bun, an MMA debutante with a 10-3 Muay Thai record.

- Yusuke Masuda (2-5-2) has officially been announced as Riki Fukuda's replacement in the 84kg weight class on Team Japan for Wedneday's DEEP/M-1 Challenge card. He'll face Team England's Matt "12 Gauge" Thorpe (10-7), who hasn't fought since last July, when he was submitted in under a minute by Team Hellboy prospect Simeon Thoresen.

- In his latest blog, Shinya Aoki says he's excited to watch the 2009 All Japan Judo Championships, which start this week (the Golden Week holiday) in Tokyo. He was unable to attend last year because of his rematch with "JZ" Cavalcante. He also takes (mock) offense at statements made by DEEP boss Shigeru Saeki that tickets are selling fast to the DEEP/M-1 Challenge show because of Fedor Emelianenko's appearance (and not Aoki's).