Share All sharing options for: The Week in Quotes - April 19th to 25th 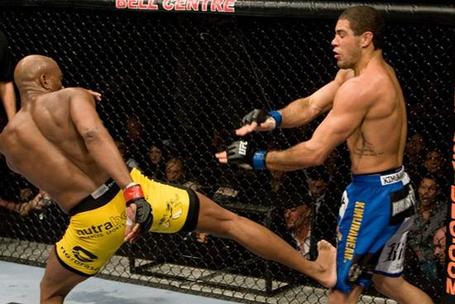 MR. SILVA, YOU WILL BE TRIED BY A JURY OF YOUR PEERS

"You never want to disrespect fellow fighters, much less two contesting a UFC world title, but I think both guys should hang their heads in shame, quite honestly." - TUF 3 winner Michael Bisping disrespecting both guys. (UFC.com)

"Disrespect to the public and so bad for the UFC, because everybody is waiting to see a great show." - Former Pride middleweight champ Wanderlei Silva after a meal of rice and chicken (chicken and rice). (Fighters Only)

"Well, I’ll just say that at least I can expect to take a bathroom break or to go grab a refreshment when it comes time for him to fight." - Former UFC welterweight champ Matt Hughes, in between beating his dad with brother Mark. (matt-hughes.com)

"He threw a punch at the air and the guy fell down.  He was attacking him the whole time." - Former UFC light heavyweight champ Chuck Liddell dressing down journalist Mike Straka at the post fight presser. (Cage Writer)

"I’m comfortable with people’s opinion, because they have a right to their opinion, but when I went out there, everything I [prepared for] in training, I felt I executed in the fight." - UFC middleweight champ Anderson Silva, the misunderstood artist for our time. (Yahoo)

BRING OUT YOUR DEAD

"Chuck has been doing this for 16, 17 years...and I guess the old saying is, it's very hard to train an old dog to do new tricks." - Olympic gold medalist Howard Davis Jr. commenting on Chuck's habit of dropping his hands. (Cage Writer)

"There were no changes. I knew that before the fight because an inside source told me that it was just a front." - UFC light heavyweight champ Rashad Evans

HE'S NOT QUITE DEAD!

"Number one, I like him and I like watching him. Number two, I still think he's good enough to do some serious damage to people." - Hughes, explaining his reasons for wanting to see Chuck fight more.

" Now I mainly eat a horse meat, rice and protein shakes." - Alistair Overeem, to be the horse you got to eat the horse. (Index.hr)

WELCOME TO BLOODYRAGS.COM, NUMBER ONE IN MMA COVERAGE

"But they claimed the bikini was wet, and a wet bikini would weigh 6 pounds." - Hitomi Akano's manager Shu Hirata. (MMA Weekly)

"I heard blame on a scale at a gym they used, the period (as explained to me by saying, “Blood” in a Portuguese accent and making a whooshing effect with his hands from the crotch area.), and the fact that Gremlins didn’t enter the picture is surprising." - King of Pancrase Josh Barnett channeling his inner gynocologist.  (Josh Barnett Myspace)

"This guy is like a great white shark. When there is blood in the water, he is going to fucking kill you." - UFC President Dana White, on Anderson Silva. (Inside Fighting)

"Now when is the last time you saw the Leon Spinks fucking doll?" - White, highlighting his efforts to set up fighters financially post-retirement.

"I have gay and lesbian friends, people who I respect." - White, with the worst defense of offensive language.

"The reality is though that as we get bigger, a lot of the bigger companies we do business with have no fucking balls whatsoever. They will fucking tuck dick and run in thirteen seconds. And I didn’t build this thing to what it is by being a pussy." - White, if he can't offend sponsors through coarse language, he'll do it directly.

"The old Matt Hamill is not the new one." - Matt Hamill, in things that make you go "Hm." (MMA Fanhouse)

"Frankly, I am absolutely unmotivated by money." - Femme fatale Gina Carano who must be holding out on a Strikeforce deal for more chocolate. (MMA Fanhouse)