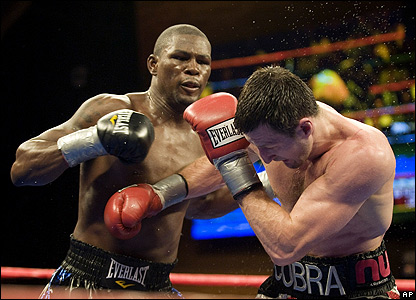 We've talked in the past about enjoying boxing and the fact that MMA (and boxing) fans need to let go of this stupid boxing vs. MMA mindset.  They are different sports under the combat sports umbrella.  As we cover K-1 and occasionally will talk boxing I've always considered BloodyElbow to be a combat sports blog more than simply an MMA blog.  When there is a combat sports event that deserves mention I will go out of my way to give it that mention.

Last night we had a full schedule of regional MMA shows but nothing was on the level of importance of the WBC Super Middleweight title bout between Jermain Taylor and Carl Froch.  And nothing that I have watched from last night has matched it in drama and excitement.  I'm going to bury the results of the fight in the extended entry but I just want to give a shout out to BadLeftHook who has great coverage of the event including talk of a rematch.  But let me say this for those of you with Showtime, track down the replay.  It's worth your time.

Now for those of you that chose to peep the results here are some highlights from BadLeftHook's recap:

Taylor (28-3-1, 17 KO) lost his third fight in his last four outings, and it came with the same questions that were raised against Kelly Pavlik. Taylor started hot and was downright dominating Froch for much of the fight. I had him up 106-102 going into the final round -- Taylor had used a piston-like jab and some good power shots, decking Froch in the third round. It was the first time Froch has been down in his pro career, and he recovered quite well. But the difference in handspeed, athleticism and skill was clear much of the fight.

However, in the middle rounds, Taylor seemed to slow down just a bit. He was still winning the fight, but in the final few rounds, it was Froch who took over. In the 12th round, he attacked Taylor with a ferocity, clearly feeling he needed the KO. He turned out to be right: Two of the official judges had it 106-102 Taylor, same as I did.

Froch floored Taylor, who tried desperately to hang on. With 16 seconds left, the referee jumped in to stop Froch's massive assault -- it was the right call. Even though there was almost no time left in the fight, Taylor couldn't be allowed to be pounded on anymore.

There isn't much more drama in sports than stopping a man in the last round with 16 seconds to go when you are losing on the scorecards in a legitimate world title fight.  It was a blast to watch the fight with Scott Christ of badlefthook and a room full of others as the final round unfolded and ended with a chorus of "OH! OH! OH! NO WAY!  NO WAY!"  It was a hell of a moment and one of the highlights of my 2009 combat sports viewing.