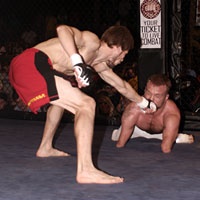 MMAJunkie with some highlights including details of the "arena":

Described by event commentators as having a "tin roof, barn next to us, a little hay and no poop on the floor," the venue had a dirt floor, a square cage and a hammer and a metal pipe serving as the official bell.

Although not part of the original plan, Maynard did not wear gloves to the cage. Commentators blamed humidity as a potential culprit, citing a difficulty in securing the gloves to Maynard's appendages. As such, Maynard was ruled unable to throw strikes with his genetically shortened arms.

And the way the fight played out:

While the crowd in attendance was obviously disappointed at the course of action, Maynard's opponent, Bryan Fry, stuck to an effective gameplan. Refusing to go to the floor with Maynard, Fry played matador to his opponent's charging bull – backing away from Maynard's repeated takedown rushes while peppering his face with jabs.

I've been trying to track down video of the fight but haven't been able to find it.  But it sounds like Fry used the right strategy and that Kyle being unable to secure a takedown meant that his inability to throw strikes meant nothing in the overall picture.  Of course Fry was booed upon leaving the cage really securing the fact that he was in a no win situation all along.  Without seeing the video it's hard to tell if he was merciful in only throwing jabs and was passing up on throwing a power shot or if he was just looking to maintain distance I'm sure that his having to bend over to throw punches played into his choices of strikes as well.

Regardless, it took a certain amount of courage for both guys to take the fight and I have a good deal of respect for both of them.  Hopefully Fry can continue fighting without just being forever tagged as "the guy who beat up Kyle Maynard."