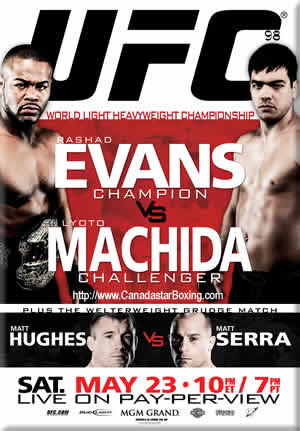 Greg Jackson is facing the biggest coaching test of his career.  He has to coach Rashad Evans against Lyoto Machida, and he has to prepare a gameplan for a fighter that has confused and frustrated everyone he's ever fought.

Unlike Rashad's last 3 opponents, Machida is not going to come forward and let Rashad take his shots from against the fence.  Both of these guys like to frustrate their opponents and take advantage of mistakes, but Machida has been far more successful at avoiding taking shots on his feet.  At the same time, he hasn't fought strikers recently like Forrest Griffin, Michael Bisping, and Chuck Liddell.  If I was coaching Evans, here are five things I would want him to do to win this fight.

The first and most obvious key is for Rashad to stay patient.  Thiago Silva gameplanned around Machida's frustrating style, but recently admitted he was frustrated out of his mind just a minute into the fight.  Even if the audience boos, and they will, Rashad can't let it get to his head.

Second, Rashad needs to know Machida's footwork like it's his own.  From what both Ortiz and Silva said and did, it looks like they thought they could chase Machida down and eventually time his movement to catch him.  They never came close, and if Rashad tries the same he won't either.  The camp needs to carefully study Machida's footwork to try to anticipate his evasive moves, so Rashad can stay a step ahead and unload where he believes Machida will be next.  The only way to hurt a guy who can't be chased down is to know where he's going before he starts moving.  Thankfully, Rashad probably has the best camp out there to do this with.

Third, Rashad can steal rounds with takedowns.  He hasn't used wrestling in a while, and Machida has excellent takedown defense due to his sumo background, but we haven't seen Machida defend takedowns against someone that is also a threat standing.  This fight is very likely to go to decision, and given the fact that Machida rounds are often decided on a small number of strikes, takedowns near the end of rounds are a good way to win over judges unimpressed with his style.

Fourth, headhunting is a waste of time.  In addition to his amazing footwork, Machida has very good head movement.  Guys spend 15 minutes swinging at his head and never get close.  Take a lesson from what Mayweather's opponents know: you just can't move your body away as fast as you can move your head.  The best way to slow Machida down is to attack his body.

Finally, if possible, use anticipation of his movements to get into the clinch.  The only weakness from Machida we've seen was a small susceptibility to dirty boxing in the third round of the Ortiz fight.  From the clinch, dirty boxing, takedowns, and opportunities to push off and land blows could be effective against Machida.

All this being said, I am leaning towards Machida with a month to go before the fight.  He is so fast and has so many tools, and nobody has figured him out yet.  Rashad needs to fight the perfect fight to win, Machida just needs to fight his normal fight to win.