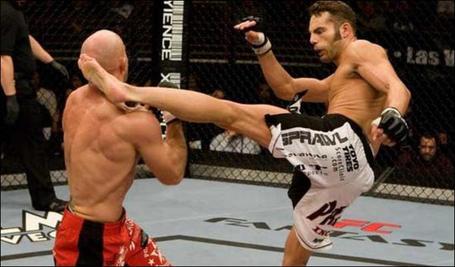 Promoted to the front page from the FanPosts by Chris Nelson.

It isn't strange that fighters utter the words "title shot" prematurely in this sport. In fact, it's probably one of the most common things among competitors who are looking to show their confidence to the fans, garner a little interest, and give themselves a shove into the limelight at the top of their division. The latest fighter to put title talk into the heads of fans is Mike Swick:

"I think it will be very exciting! He is a tough opponent who is scrappy and likes to clinch and bang. I definitely will want to bang so it should be good!I just fight who they tell me. Ben’s name came up as an available opponent and I said ok…. I think an exciting win in Germany will grant me a title shot. At least, thats what I hope."

Does Mike Swick deserve a title shot if he impressively brutalizes Ben Saunders at UFC 99? My personal opinion is that he's far from a title shot in terms of proving his skills. Moving down to 170, a knockout win over Jonathan Goulet doesn't exactly provide me with solid proof that he can suddenly hang in there with guys like Georges St. Pierre, Thiago Alves, and the rest of the group in the upper echelon of the division. Wins over Burkman and Davis are solid, but I'm not convinced.

There is always another side to the argument though, and I'll take Brent Brookhouse's thoughts on Kongo into this equation. First and foremost, Swick has had the exposure: not only did he have a stint on The Ultimate Fighter, but he's fought in a total of 9 UFC events with a lot of those fights gaining exposure to a national audience. His knockout of Goulet was on a free UFC show, and his win over Marcus Davis was televised at UFC 85.

He's also in the fortunate situation of having his own teammates near the top of the food chain. It's well known that the AKA guys won't fight each other, and this eliminates the possibility of Swick taking on Josh Koscheck or Jon Fitch in the division.

Does Mike Swick deserve a title shot? I'll stick with my guns and say "no," because I believe the UFC hype machine has created this aura around Mike Swick of being this unbelievably great fighter which he's just not at this point in his career.

Would I be surprised if he was given a premature title shot with a huge win over Ben Saunders? Absolutely not, because I know that Swick not only has the exposure to give him the marketability factor in getting some drawing power in a title shot situation, but he is also fortunate enough to be a bright spot in a division that's beginning to lack a little depth near the top.

What do you think?

Does Mike Swick deserve a title shot with a win over Ben Saunders?