Share All sharing options for: Fedor Emelianenko vs. Shinya Aoki at DEEP/M-1 Challenge 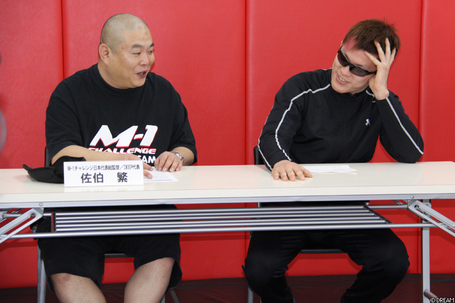 The rumors are true: MMA's undisputed #1 heavyweight and Japan's top lightweight will square off in a special exhibition match at next Wednesday's DEEP/M-1 Challenge event. DEEP President Shigeru Saeki and Shinya Aoki announced the fight today at a press conference in Tokyo; Fedor was not present, though his manager Vadim Finkelstein and Affliction VP Tom Atencio are said to be in Japan at the moment. The specifications and rules for the bout have not been finalized, but Saeki likened it to this week's K-1 MAX exhibition between Masato and 17-year-old kickboxing phenom HIROYA. (For what it's worth, HIROYA wore headgear and both parties wore shinguards.) Due to the weight difference between the two, this will presumably be a pure grappling or Sambo match. Aoki says he's pleased to be able to set foot in the ring with "the symbol of MMA."

Also announced for next Wednesday: Abe Ani Combat Club's Yusuke Masuda (2-5-2) will take Riki Fukuda's spot at 84kg on Team Japan, squaring off against England's Matt "12 Gauge" Thorpe (10-7). Fukuda pulled out of the event in favor of facing Murilo "Ninja" Rua on 48 hours notice at DREAM.8, where he won by unanimous decision.

Don't forget, the entire DEEP/M-1 Challenge show will be streaming over at Japan-MMA. The BE Night Crew will undoubtedly be up in full force for this one.

[UPDATE] God Bless The Ring reports that this will be a 3-5 minute Sambo match, according to Saeki.