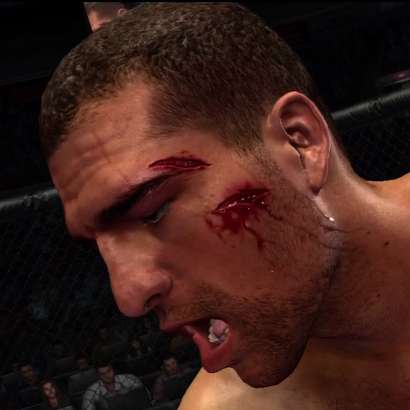 The lady at Jimmy John's is glaring at me because she has been trained to wipe down my table and my continued presence while I write this prevents her. Anyway, UFC 2009: Undisputed the demo hits XBox 360 and PS3 systems officially today. The goal of this thread is to provide a discussion point for the Bloody Elbow community's reaction to the gaming experience, a place to share your favorite KO story, link to a fight video, and express distain in various degrees on gameplay mechanics. Stuff such as that.

About the demo: it's fun. Before acquiring the preview, I watched uploaded videos of it on YouTube. Some of these were from cell phones or laptop cameras; it really did not matter. It was here. Whatever this turned out to be was here. From a personal level, I can say watching even these secondary sources increased my anticipation for the fight at UFC 97, the real fight (the demo contains only Chuck Liddell and "Shogun" Rua), and I can only assume playing through a fight card and a bottle of Blue Moon before any cage door closes in a PPV will contain the same mood of anticipation.

As it concerns the game in specifics, common issues and themes have been voiced: submissions against the computer are too difficult, mouthpieces eject in an amount too great, KO's are overly dramatic, etc. While these things could each be addressed to some degree in future iterations, they do not prevent me from hitting Rematch on a fight I have played out in every scenario between the same two characters. The gameplay is expansive and deep enough to hold that amount of replay value.

Michael Rome has previously given his impression on the various ranges of exhibition play, the only mode in the demo besides the tutorial, here.

As for the final version of Undisputed with its career mode, Gamespy has more information:

Career mode should not only give you the standard ways of customizing your fighter's appearance (along with the ability to pick one striking and one grappling skill each), but also feature training sessions at different fighters' camps where you'll learn new moves. For example, you may be invited to train with "Team Penn," take a first-level kickboxing lesson, or learn how to throw a Superman Punch.

Career mode doesn't stop there, though. There are a ton of things you can do to improve your fighter, but part of the strategy will lie in what part of the fighter's arsenal you want to improve and when. First, different points are awarded to strength, speed or cardiovascular fitness, and then it comes time to work on attributes like clinch and grappling offense, takedown offense and defense, or submission offense. One thing that will throw a wrench into the works is the mode's calendar system, which provides an added challenge. If the created fighter spars soon before a match, whatever experience and skill he gains can be negated by the precious stamina sparring can sap. If all attention is focused towards fitness goals, then he may not have enough tricks in his bag to compete against more experienced and higher-ranked opponents in his climb towards glory. In the process, created characters get money, fame, equipment, sponsorships, even better sparring partners. The online experience will consist of characters from career mode as well as roster members competing against each other in ranked exhibition matches.

In the extended entry are various fight videos which have been uploaded. They can be viewed in HD at their respective YouTube page. If anyone posts a link to their own in the comments, I might embed it as well.

Hopefully, I am not the only one excited.