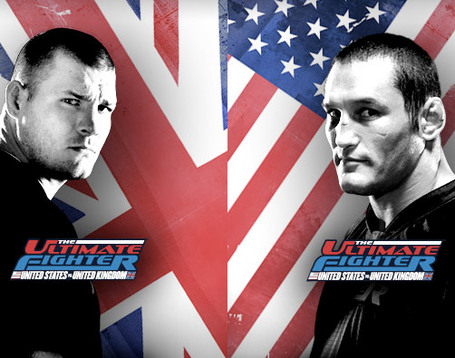 Last week, Kiel Reid Maynard'd himself out of the house while Jason Dent became everyone's hero as he sent Rob Browning packing.  There was much rejoicing.  Yay.

Team United States won the coin toss and get to pick the first fight.  Will they target the strongest Team United Kingdom members?  Prey on the weak?  We'll find out.

Programming Note: I believe the past two weeks had TUF come on at 10 ET/7 PT and Bloody Elbow cult favorite "Deadliest Warrior" follow.  For whatever reason, Spike is re-showing TUF immediately afterwards instead.  An episode of Deadliest Warrior will be playing at 9 ET/6 PT, but my TV menu lists it as a rerun of the first episode.  This is especially annoying as this week's episode is the much anticipated "Ninjas vs. Spartans."

Those who wish to watch continue watching this as a community, however, should head over to Spike.com following TUF and load up the show.  Direct link here.