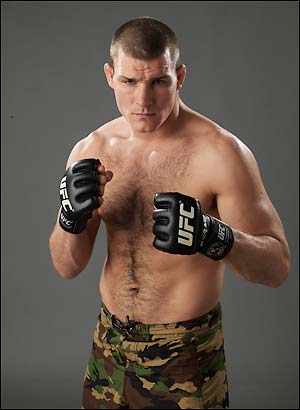 A number of fighters are now stating their disapproval regarding the UFC 97 main event.  The latest among them is Michael Bisping, who is one win away from a title shot against Anderson Silva:

I wasn’t impressed at all with the main event. You never want to disrespect fellow fighters, much less two contesting a UFC world title, but I think both guys should hang their heads in shame, quite honestly. Leites probably won the first two rounds but nothing happened in the fight.

I fought on the first card in Montreal last April, and the Canadians are tremendous supporters of the UFC. They deserved a hell of a lot better than they got from these two. I've seen more aggression from my fiancé when she hits the January sales.

It was very frustrating for me to be sitting on my couch seeing Anderson Silva, who keeps saying how he’s gone through the middleweight division. I would have fought harder than both of them put together, and so would a lot of other middleweights.

If Bisping can get past Henderson, he'll have a chance to put his money where his mouth is in the fall.  Bisping wasn't exactly aggressive either in his last fight, so perhaps he doesn't have much room to talk.

I will say that the one impressive thing being overlooked about the UFC 97 main event was the way Anderson Silva shut Leites down on the ground.  Leites got the fight where he wanted and couldn't do anything with it.  I believe that once he realized that Anderson was tougher on the ground than he expected, he checked out of the fight mentally.  This is just another point worth bringing up once someone brings up Takase or Lutter.  Anderson totally shut down a world class grappler who had top position.