Fighternomics: The Strategies of Anderson Silva and Thales Leites

Share All sharing options for: Fighternomics: The Strategies of Anderson Silva and Thales Leites 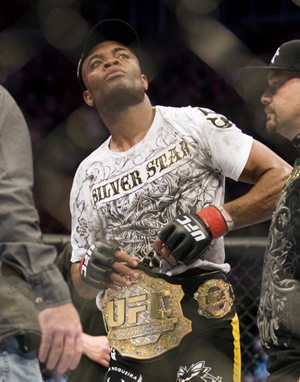 Since the final horn, we've seen a long series of back-and-forth articles about the performances of Anderson Silva and Thales Leites in their bout at UFC 97.  Silva, the Zuffa-heralded pound-for-pound king, has been chastised for his tentativeness to work towards a finish while others have blasted Leites for continually flopping to the floor when Silva applied pressure - even Chuck Liddell had something to say about it.

I've been sitting on a quality article I read about strategy between mismatched college football teams (though it applies to all sports) for some time now.  The article proves poignant after the events on Saturday, and gives good reasons why Silva took a reserved approach while providing the logic behind the idea that Leites needed to be more aggressive to have any chance at victory.

But is that true in college? Or in high school? Think about when Florida plays the Citadel. The Gators have a massive talent advantage compared with the Bulldogs. As a result, what is the only way they can lose? You guessed it: by blowing it. They can really only lose if they go out and throw lots of interceptions, gamble on defense and give up unnecessary big plays, or just stink it up.

A fan or some uninitiated coach might see this as a lack of effort, but another view might be that Florida used an unnecessarily risky gameplan that cost them a victory. And since we know that they would win almost every time, what did they gain by being more aggressive? Even if they gained in expected points, this is something like the difference between a forty-point and sixty-point victory, which ought to be irrelevant.

It's a well-worn belief that underdogs -- i.e. the kind of severely outmatched opponent that cannot win without some good luck -- must employ some risky strategies to succeed. This has long been believed but now we have a reason, though it also teaches us that there is a price to this bargain. The underdog absolutely must take the riskier strategy, whether by throwing more and more aggressively, by onside kicking, or doing flea-flickers and trick plays. They have to get lucky. In the process, however, they also increase the chance that they will get blown out, possibly quite badly. But isn't that worth the price of a shot at winning? Florida might pick off the pass and run it back for a touchdown; they might sack the quarterback and make him fumble; they might blow up the double-reverse pass. If so, then things look grim. But what if they didn't? And if the team didn't do those things, how can it beat them by being conservative? By waiting for Florida to make mistakes?

After two rounds, it became apparent to most watching that Leites needed some sort of extraordinary event to take place if he had any hopes of winning.  His lone highlight, a takedown Leites landed in the second, hinged little on his ability to wrestle.  Silva, for the most part, gets put on his back because he's unafraid to lose position following a strike, and that's essentially what happened on Saturday night.

With conventional technique having little success, Leites needed to attempt some sort of aggressive and unorthodox attack.  Interestingly enough, we only have to look back to Silva's fight with Ryo Chonan in Pride for a perfect example of this.  Silva, fighting on an injured ankle, looked to be plodding his way to a decision victory until Chonan submitted the Spider with a flying heel hook.

Leites essentially had this decision to make: fight conservatively with self-preservation in mind and win 0.1% of the time (roughly the amount of time Silva blows his knee or some other fight-ending injury) or throw the kitchen sink at Silva and get knocked out 97% of the time but coming out victorious that other 3%.  Again, rough estimates, but the point should remain clear.

As for Silva, he touches on this issue with Tatame.

One way or another he fought well, came well prepared, but I would have a lot to risk. I’m not risking something that took a long time for me to win. I think the fans are talking, criticizing...Each one has their opinion, I have to respect their opinion...I try to fight and don’t get hurt and this is working over all these years.

It's been just over 2 years since Matt Serra beat Georges St. Pierre and I think it's safe to say that loss still sits in the back of the MMA consciousness.  We also need to remember Anderson is 34 years old - older than Wanderlei Silva, older than the Nogueira brothers, older than Vitor Belfort.  Even disregarding the self-imposed retirement talk, his window as a peak athlete shrinks by the minute.  And it's only been very recently that he's been making big time, PPV-laden money.

For better or worse, Silva has plenty of incentive to maximize his win expectation even if that sacrifices his knockout or submission expectation.  I can't really say I blame him for trying to protect his assets either.