Share All sharing options for: Yves Lavigne Wiped Down Anderson Silva at UFC 97 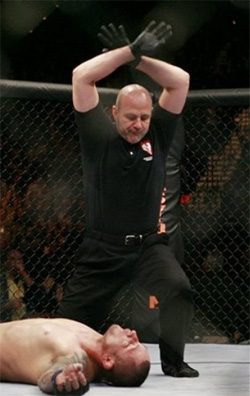 Josh Gross asserted that Anderson Silva spread the Vaseline applied to his face onto his body upon entering the cage at UFC 97.  MMA media avoided GreaseGate II thanks to the controversy surrounding the performances of both Silva and Leites that night.

To clear up any potential story, Sherdog spoke to Yves Lavigne about the incident.  Excerpt:

“I saw he had a little Vaseline on his chest and I wiped it from his chest and arms, as I saw him touching them as well,” Lavigne told Sherdog.com on Tuesday.

Lavigne said he then motioned to Leites’ corner and was given a “thumbs up” of approval.

“I took care of it, and the other corner felt OK with it,” said Lavigne.

Lavigne rightfully took a lot of abuse over his handling of the Brown-Sell fight at UFC 96.  The above anecdote, however, shows why he's still regarded as one of the top referees in the sport.