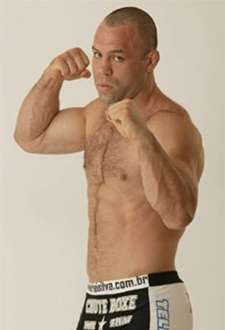 Stories of the feud between Anderson Silva and Chute Box are stuff of  MMA legend.  It's hard to sort fact from fiction, but what we do know is that there were hard feelings after a falling out years ago, and they've come back to the forefront recently.

It started with an interview Anderson Silva did with Brazilian television, where he reportedly called Wanderlei's move to middleweight pretentious, and said Wand would be hurt.  Wanderlei did not take it well, and had the following to say to Sherdog:

"He is too cocky. I hope he can read this. … I never talked anything bad about him; I always respected him. He has always been my friend, always respected me, but now he came with that statement. I can’t understand that. I didn’t come down to 185 to face him. Actually I didn’t have that intention. … Changing divisions and fighting the champion would be too pretentious. I should have to have many fights before facing him, but concerning his last statements, I think the way is open and the war is declared."

"If you are going to fight in the main event you have a lot of responsibility because the fans pay to see [the fights] and this [performance] is bad for the sport. Everybody needs to have serious conduct in the fights, respect the fight."

I'd be lying if I said this didn't get me excited.  There are some rumors now about an Anderson-Jardine fight as the co-main event of UFC 102, though personally that fight does nothing for me.  I don't know what Wanderlei has in the tank, but this is the kind of war that excites me.  It probably ends in Wand going down, but you can say that about most Anderson Silva fights, and if Wanderlei can get by Rich Franklin they should do this fight.

I know there are all sorts of problems with this fight, but it has a few intangible factors going for it that other proposed Anderson fights don't have.  The guys don't like each other, fans actually care about both guys, and you know both will be extremely motivated.  If they're so scared of boring fights, this is one guaranteed to be the opposite.