Share All sharing options for: Quote of the Day 2: Mauricio "Shogun" Rua 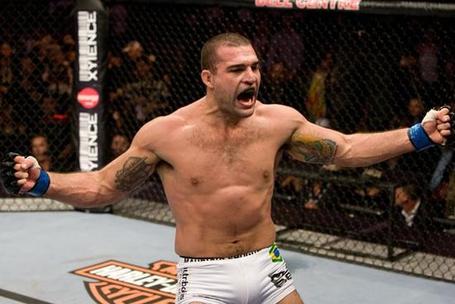 "Since the start I was very motivated [to fight Chuck Liddell] and it was important. I’ve trained hard, very focused, more prepared physically and mentally, so I got there ready to show my work and everything I’ve trained," says Shogun, pleased to introduce himself to the American fans. "Actually, I haven’t fought well in the UFC, so I knew I needed to show my potential to the American fans, and it all depended on me. It wasn’t easy, but I could show them… I’ll train even more to keep this focus."

Going to a two weeks trip with his wife to relax, the Brazilian put his UFC future in his manager’s hands, but gives some tips to the matchmaker Joe Silva. "Nobody spoke yet (about my next fight), but my goal is to win the next one. I’m already focused for the next fight. I’ll fight anyone, but a rematch (with Forrest Griffin) would be welcome. He’s a good fighter and it’d be a good fight. I’ll fight anyone, but it’d be cool to fight him again, I’d love it."

I must say I've been impressed by the humble, affable, no-excuses "Shogun" we've seen following this huge comeback win. He clearly understands that he got off on the wrong foot with UFC viewers and it sounds like he's doing everything in his power to change the fans' perception of him. It's too soon to say if a rematch with Forrest would go much different from their first dance - though Rua certainly looked to have his legs back on Saturday - but trying to avenge one of the two losses  he's got left on his record seems the logical next step for a man whose stock within the company just skyrocketed.

UPDATE: In writing this, it slipped my mind that Forrest is going to miss most of 2009 with his hand injury. My next choice for "Shogun" would be someone like Keith Jardine, with an eye on avenging the Griffin loss down the line.

UPDATE #2: Michael David Smith from MMA Fanhouse reminds me that the reason I didn't remember that Forrest is out for most of the year is because he isn't. So, with Griffin is already paired up for the summer, I'll stick with Rua-Jardine for now.