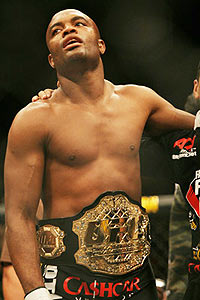 Despite Roy Jones' suggestions to the contrary, the fight between Jones and Anderson Silva will almost surely never happen, at least not on a major stage.  First of all, Silva has 3 or 4 more fights on his current deal.  The deal is not done in September.  Silva signed a six fight extension in 2008.

The second obstacle is Anderson's contractual status.  If he continues to win, his contract automatically extends under the championship clause.  If he loses, the value in this fight pretty much disappears.  He's trapped in the contract, which may explain his recent tantrums.

The third obstacle is that there's no money in this if Anderson loses and the UFC isn't involved.  Without UFC promotion, this fight is worthless on PPV, and the UFC will never be involved in promoting this.  They don't want to push an MMA vs. boxing fight where they think they will lose, and they certainly won't do it for someone outside of their organization.  Without proper footage of Silva, and without the UFC marketing machine, this is just another fight.  If Anderson left the UFC tomorrow and went to Affliction, their numbers wouldn't go up.  In fact, they might go down.  He is now probably bordering on being a negative draw.  If it was such a big draw to have a big name boxer against a former MMA champion, we would have seen it by now.

If the fight does happen, it'll be in a long time, and it won't be the super fight people think of now.  It will be interesting to see what Roy thinks of the vanity project once he realizes nobody cares anymore.