Cheick Kongo Should Get a Title Shot

Share All sharing options for: Cheick Kongo Should Get a Title Shot 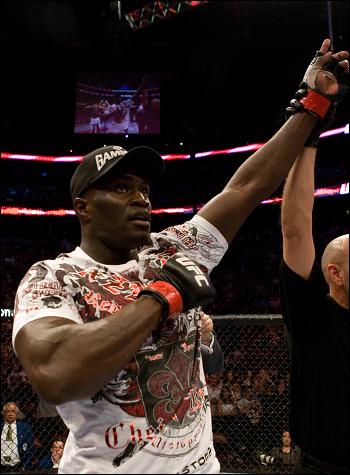 Cheick Kongo should get a title shot against the winner of Brock Lesnar and Frank Mir.  There, I said it...it's out there.  I await your sarcastic comments.

Let me start by conceding that there is a lot of sound reasoning behind the idea that three wins over Evensen, Al Turk and Hardonk doesn't scream "contender."  My counter to this is simple: Kongo as a title contender is ready right now.  Shane Carwin and Cain Velasquez are better fighters on paper and probably have a better chance of winning a title fight against whoever comes out of UFC 100 as champion.  But I've always been someone who places a lot of emphasis on marketability and I also believe that development of future stars is of high importance.

Cheick Kongo has fought in the UFC nine times winning seven and losing by split decision twice.  He carries name recognition as well as one of the most impressive "looks" in the sport.  Assuming Lesnar defeats Mir in the rematch I would consider Lesnar/Kongo a license to print money based simply on the fact that it appeals to the basest elements of human interest.  People like to see two huge men fight.  A simple ad of the two men staring each other down is going to generate plenty of buzz with the casual fanbase which is the driving force of PPV success.

This isn't to suggest that Shane Carwin or Cain Velasquez aren't huge physical specimens in their own rights but both could use more time and exposure to hit their peak value.  A title fight featuring Carwin could be huge in a year if he can get one or two more impressive performances on TV.  Right now it's a fight that is carried entirely by whoever the champion is with a little bit of "future star" buzz for Carwin.  In a year it could be a mega fight featuring two legitimate superstars.  It's the same story for Velasquez.

Kongo is likely at his peak in terms of marketability.  While he has developed a strong top game I don't trust that he has anything to give off his back and it is only a matter of time until someone puts him there for three rounds and takes away that marketability like the setback that happened with Marrero in '06.  I believe in resourceful use of commodities and Kongo is the perfect guy for the champion to "stay busy" against while allowing Carwin and Velasquez to become real stars and make sure their title shots draw big money.

To top it off Cheick is a good test for both Mir (who has proven that he can get busted up on the feet and by someone with a strong top based GnP game), or Lesnar (who still needs to have his chin tested by someone with top level striking power).

I guess what I'm pushing for is for the UFC to use Kongo while he has high value, give the two future stars time to develop into big draws and testing the champion with a tough fight that is an easy sell.  It just doesn't seem that complicated to me.