Share All sharing options for: Quote of the Day: Rashad Evans Felt Bad for Chuck Liddell 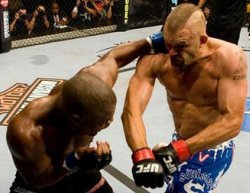 I felt so bad for him to see him go out like that...he is a great person and a legend and when you see that as a fighter, you get a small glimpse of your own demise in the sport.

There were no changes...I knew before that before the fight because an inside source told me that was just a front.

If Chuck's whole new training thing was a charade, that is pretty scandalous, but people who trained with him for this camp say he trained very hard.  Are they part of this "front" too?

Either way, I agree it was sad to see Chuck go out like that.  As soon as I saw how slow Chuck was, I knew it was a matter of time.  In the past, watching Chuck gave you a feeling of imminent doom for his opponent.  Against Shogun it felt like I was just waiting for a disaster.  I don't want to see that again, and neither does Dana.

That's why Chuck is done.