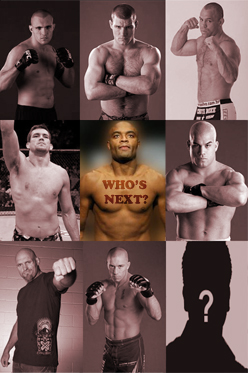 I've sat and watched the debate over Anderson's performance, and I have a strong view, but I don't want to get into that debate here.  I don't know why he performed the way he did, there could be any number of reasons.  Maybe he's bored, maybe he was trying to mock Leites, maybe he didn't want to hurt a fellow Brazilian, maybe he's mad about his contract, maybe he's mad he can't fight Roy Jones, maybe he cut too much weight...the list goes on, none of us know, so speculation is just that.

What I do know is they picked Thales Leites over Yushin Okami because they were afraid Okami would be a boring fight, and Leites has never been a cautious fighter.  Talk about your all-time backfires, and maybe they deserve it.  Either way, the victim here remains Yushin Okami, who is simply not going to get a title shot any time soon.  After last night, they aren't going to risk damaging their brand like that again.

After last night's show, a friend of mine that loves the UFC but isn't as hardcore of a fan as I am told me he will "never pay to see Anderson Silva again unless it's against someone awesome."  This is the predicament the UFC is in.  They have no good fights for him at 185, and a loss at 205 only damages the 185 title.  It looks like Dana is ready to risk it though based on his comments.

I don't think they're going to put someone with a large and marketable future in Anderson's way, so I think we can rule out Quinton Jackson, Shogun, Forrest Griffin, Rashad Evans, and even Brandon Vera.  Basically, it will be a young star or someone near the end.  There are also a few nice fights at middleweight, but a few can now be ruled out.  Here are the most likely contenders for the next Anderson Silva fight.

Luiz Cane:  This would be a nice fight, Cane has no fear and would force Anderson to fight, but I don't see him as a serious threat.  Cane just takes way too much damage in fights.  He's a tough guy, I don't think he'd really even be able to hit Silva. It's a tough fight to book given Silva's PPV bonus, but they may have to eat one on the chin to get him back in form.

Wanderlei Silva:  I think this is likely if Wanderlei beats Rich Franklin.  If he knocks Rich out, I think it becomes very likely, as that is an easy way to justify the fight.  They could do it at either weight.  I honestly don't want to see this unless Wand destroys Franklin, which I find very unlikely.

Demian Maia:  The likelihood of this fight happening soon went through the floor last night.  The last thing they want to do is put him in with another brazillian jits guy who can't hang standing.  Maia's road to a shot just got longer.

Michael Bisping:  If he beats Dan Henderson, which I give him a decent shot of doing given Henderson's weak performances at 185, this is probably going to happen this year.  They will be in no rush to give Anderson another fight after last night, he will probably hurt the next PPV he's on.  I don't see how Bisping can possibly win here, but at least he is a name.

Georges St. Pierre:  This is the fight everyone wants to see.  I know some fans have objections, but this is a huge fight, and Anderson will have to improve his wrestling about 10 times over to be able to stay off his back.  GSP has a very hard fight in July, but if he wins I think Anderson is up next.

Tito Ortiz:  Odds are he still ends up back at UFC.  Honestly, this is a dark horse, but my favorite option.  He's a big name, can draw interest, and poses an interesting stylistic challenge to Silva.  A win could completely relaunch his career, and a win for Silva would be very impressive too.

Who do you think Anderson Silva should fight?