Share All sharing options for: Win, Lose, or Draw - Scoring Condit vs. Kampmann 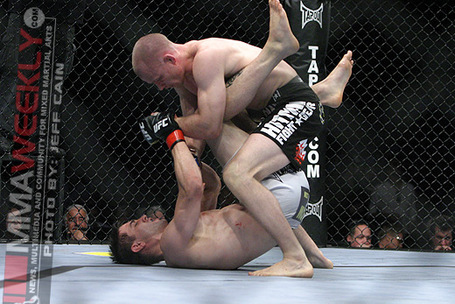 A separate storyline emerged during last night's high-level, back-and-forth fight between Martin Kampmann and Carlos Condit: who would the judges give it to?

In the Bloody Elbow live thread, opinions differed on each individual round. Even Sherdog's team had wildly different scores. Lotfi Sariahmed scored the first round for Condit and the final two for Kampmann, Jordan Breen gave rounds one and three to Kampmann (my card as well), while Mike Fridley gave the first two to Condit.

FightMetric's system scored the fight a draw (both on the ten-point must system and their total fight algorithm) and provided this analysis:

It's hard to advocate for draws. They're usually the worst resolution to a contest because no one feels like anything was settled. It's not fair for someone to work so hard and have "nothing" to show for it. But what's more unfair is to lose when you don't deserve to. Last night's main event between Martin Kampmann and Carlos Condit was a fight so evenly-matched that neither fighter deserved to lose. Looking at the in-depth report on the fight, we see a first for a match posted here: Both the ten-point must system and the overall score call this fight a draw. Each round was exceedingly close, with both Round 2 and the overall score falling within our four-point margin for error.

A draw is not a No Contest. In a No Contest, it's functionally as if the fight never happened. A draw means a hard-fought effort that was equal to the other fighter's. In a sport filled with disappointing matches where guys just fight not to lose, it's sad that one of two people really fighting to win has to lose because judges won't consider the third way.

Objectively, I think a draw is the most fair result. I think a part of the problem is that when you usually think of the "typical" ten-ten scoring, you think of a scenario where neither fighter did enough to win the round. In this fight, however, you can make a case for either guy in every period, including the third which saw Condit fighting most of the round off his back.

How did you score the fight at home?