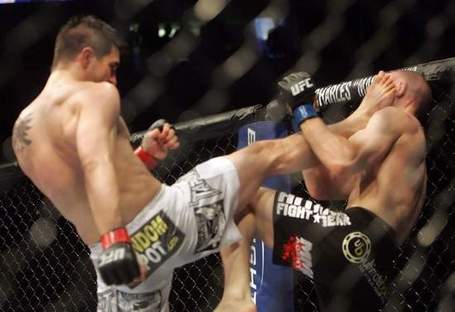 Fans were treated to an 11-bout event that couldn't have happened in Tennessee before last summer. That's when the state legislature established the Tennessee Athletic Commission to regulate combat sports, effectively legalizing ultimate fighting.

It might have been the UFC's first time in Tennessee, but the fans appeared as knowledgeable as any who have watched the sport during its 20-year history, said the organization's president, Dana White.

"Anybody that thought that this wasn't worthwhile legislation, then they're not here tonight,'' Jackson said. "And this sport will get bigger and bigger. It will bring millions upon millions of dollars here to Tennessee every year. It's a wonderful sport but more importantly, it's going to bring a lot of money to the economy."

Indeed, the gate generated $626,077, in the middle of the week, organizers said.

When asked if the UFC would return to Tennessee, White said: "Hell yes we're coming back to Tennessee. We'll probably do a pay-per-view in Memphis.''