Share All sharing options for: Martin Kampmann vs. Carlos Condit Deserved Fight of the Night Bonus 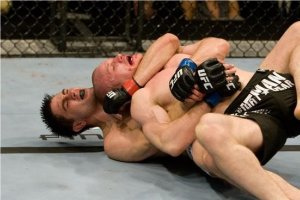 Okay, so lets say you have two fights on a card.  Fight A is reasonably lopsided with the exception of a single deep submission attempt and has an obvious decision at the end of the fight with all three judges cards reading 30-27.  Fight B is a back and forth affair featuring a mix of all the techniques that make up mixed martial arts and it too goes to the judges scorecards but this one is much closer resulting in a split decision.

Obviously when picking Fight of the Night you'd go with Fight B right?  ...right?  Apparently not if you're the UFC who awarded Fight of the Night honors to Tyson Griffin vs. Rafael dos Anjos rather than the main event of Martin Kampmann vs. Carlos Conditt.

Maybe it's just the nerdy "purist" in me coming out but the main event had much more drama as well as diverse techniques on display and was one of the better fights I've watched this year let alone tonight.  While I can appreciate the drama of dos Anjos' deep calf cutter (at least I think that's the correct technical term) the fight was more or less dominated by Tyson's mildly sloppy striking from bell to bell.  Compared to the nice transitions, deep submission attempts, clean technical striking and close rounds of Kampmann/Condit it seems that $30,000 found its way into the wrong pockets tonight.

It's a continuation of the trend toward "just stand and punch more than in the other fights and you get the bonus" that has been taking over FotN bonuses in the UFC for several events running now.  There were moments where Griffin/RdA went to the ground but they were not frequent and did not last long (with the exception of the submission attempt in the first round) while the majority of the fight was stand up fighting with relatively poor technique.

In fact, the only thing I can think of that Griffin/Anjos had more of than Condit/Kampmann was time spent on the feet and that time was not nearly as crisp and technical as what took place in the main event.  Griffin's new boxing happy style results in him dropping his hands when he throws power shots in a way that, barring correction, will get him KO'ed soon enough by a striker with powerful counter striking and dos Anjos' striking technique is actually much worse.

I'm sure the answer to this from a lot of our readers is going to be "Kampmann and Condit probably got a nice locker room bonus" but that's besides the point.  I just want to see the UFC move away from simply awarding guys for standing and striking if it does not actually make for the best fight that took place that evening.  Maybe tonight is the night that finally gets me to buy into the conspiracy theory that the UFC is trying to manufacture a specific type of style by setting up this very specific type of reward system.