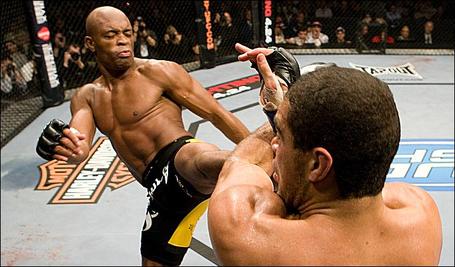 I'm honestly shocked anyone is defending the absolute deliberate and unprofessional performance turned in last night by UFC Middleweight champion Anderson Silva. What the alleged pound-for-pound king offered fans was the equivalent of doing one's job just enough to not get fired. I felt like I was watching the worst cliche of labor union work ethic where employees take advantage of every contractual reprieve from performing the responsibilities of their job just to skate through until quitting time saves them.

Anyone who has been to their fair share of amateur fights should've been reminded of their experience watching Silva vs. Leites. The amateur ranks are filled with pure jiu-jitsu players looking for MMA experience, so a significant portion of them flop to guard as Leites did after realizing they don't want to get punched but can't take their opposition to the ground. This dynamic happens in the professional ranks obviously, but not nearly to the same extent. Like hands on the knees is a universal indication a fighter is fatigued, flopping to guard in MMA is a universal sign your opposition is out of options and ready to be finished off. It is the ultimate signal your opponent is not able to do anything to you and can be overcome by pressing the action. Interestingly, however, nearly every time I've personally witnessed a fighter flop to guard in the amateur ranks, the retreating fighter is quickly defeated. Silva, clearly too preoccupied for such pedestrian responsibilities, couldn't be bothered to follow through on what amateur MMA fighters commonly recognize as the beginning of the end.

It's understandable MMA fans want to be forgiving of cerebral or cautious approaches to fighting, but that forgiveness has no place here. Your eyes were not lying to you: what Silva did was absolutely deliberate and positively negligent. Leites has responsibility is last night's disaster of a main event, but he turned out to be who we thought he was. That he flopped to guard is regrettable, but he simply didn't have the skill set to compete at this level. Silva, on the other hand, had more than enough tools. What is infinitely more regrettable is that Silva squandered countless offensive opportunities to put him away standing. I've managed to suffer through three viewings of their fight and to say Silva didn't push the attack in the stand-up is the understatement of the century. From the middle of the third round on, Silva employed nothing more than a potshot approach that looked as if he'd simply forgot he has some of the most excellent and diverse combinations in all of MMA.

What's really alarming is the language Silva uses to describe his feelings on the fight:

"I’m comfortable with people’s opinion, because they have a right to their opinion, but when I went out there, everything I [prepared for] in training, I felt I executed in the fight. My game plan was that I wanted to go to the later rounds with Thales. I was unable to finish. Sometimes I’m able to finish guys and sometimes I’m not able to. But I felt I proved to everybody that I’m able to go five rounds and that I’m in good shape."

This is obfuscation of the first order. Silva is not fighting to prove he has the stamina to go five rounds or that he can jog without breaking a sweat. Those are expectations for the champion of the UFC's middleweight division. It's no wonder Silva turned in a reluctant performance considering his expectation threshold is the same for participants in a fitness step class.

I don't know if Silva is simply uninterested in fighting MMA anymore or whether he's still pining after a boxing match with Roy Jones, Jr. What's motivating him to do this is impossible to know without talking to him personally, but let's remind ourselves of one clear rule: MMA is a for-profit, entertainment business. Yet "entertainment" doesn't mean Silva or any fighter has to reduce themselves to rock 'em sock 'em robots. The fortunate truth about MMA is that most entertainment actually comes when fighters work to finish fights and attack throughout the course of the bout. It means when there's an opening to hurt opposition, you take it. Appropriate risk management and sustained offensive attacks are not mutually exclusive. Silva could've met the UFC's and fans' expectations about being entertained without unnecessarily putting himself at too great a risk. What people need to come to grips with is that Silva chose to take it easy on Leites. He chose to childishly throw absurd and positively perfunctory kicks to Leites's knees when he could've much more easily thrown round kicks to the inside and outside of Leites's lead leg (sorry, folks, but neither Leites's wrestling nor his muay Thai is good enough to warrant pulling back on kicks to avoid the takedown). He chose to not throw aggressive combinations to the head and body with his pinpoint accuracy. The sad reality is you cannot have it both ways: you cannot tout a fighter's peerless technical and athletic abilities to destruct opponents standing and then forgive him when he doesn't use those skills in clear opportunities against an opponent who was out of offensive options and could do no more than flop to guard.

I don't know what sort of childish protest Silva is launching here. But what I do know is that fans and the UFC should not cry when a fight goes five rounds because opponents could not finish each other. However, they have every right to be angry when fighters who can don't even try.