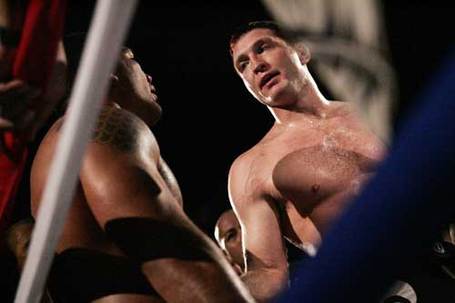 A few hours after Anderson Silva and Thales Leites ended their dance in Montreal, another middleweight title was contested on the island of Oahu, and this one ended far more decisively. After momentarily engaging on the feet, Jason "Mayhem" Miller (22-6) easily floored the outsized ICON Sport champ Kala "Kolohe" Hose (7-3) with a double leg, softened him up with punches, then secured a bout-ending rear naked choke at 2:23 of Round 1 to earn the 185-pound title at promoter T.Jay Thompson's inaugural Kingdom MMA event. "Mayhem" hit the mic after the win and pleaded for the support of the Hawaiian fans on May 26th when, he confirmed, he'll rematch Ronaldo "Jacare" Souza at DREAM.9 for the promotion's vacated middleweight belt.

Some post-fight comments from "Mayhem" via the Honolulu Advertiser:

"I knew it was over once I took him down," Miller said. "I think his lone chance was to tag me in stand up and that didn't happen. I felt one hard punch from him and it didn't hurt me, so I was like 'OK, I got this.' Then he gave me the opportunity to take out his legs, and that was basically the end of the fight."

"Like I said before, I'm a fighter first," Miller said. "You believe me now?"

Video of the fight after the jump.