Promoted to the front page from the FanPosts by Luke Thomas. 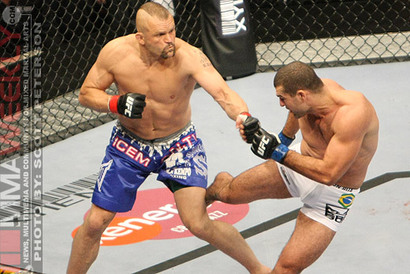 Chuck Liddell: "We'll talk about it Monday, Tuesday. But, this could be my last time."

DW: "I am personally unhappy with the whole fight, period. I did not like the fight at all. Period. On either side."

Anderson Silva [trans]: "He wasn't able to execute his game and I was able to do mine. And I walked away with the victory and the belt still."

Chuck Liddell on Silva-Leites: "He was attacking him the whole time... It is a frustrating fight for a striker when a guy every time you go to hit him he falls to his back."

DW: "Fedor is not the pound-for-pound best fighter in the world. These guys continue to fight the best. Fedor is at a buffet somewhere in Russia."

Sam Stout: "I did a six hour warm-up for my fight tonight."