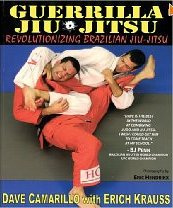 I had been slow to pick this one up for two reasons: all I knew about Dave Camarillo was that he was the jiu jitsu instructor at the American Kickboxing Academy; and the book focuses on grappling with a gi, not my main area of interest.

But I was jonesing for some Victory Belt action so I decided to check it out and I'm glad I did.

Camarillo came from a judo background before getting into jiu jitsu with Ralph Gracie. He and his brother were practically raised to compete in judo by their father. He trained in Japan and was gearing up for an Olympic run when a knee injury limited him to ground fighting. That was the perfect time to take up jiu jitsu and Camarillo met Ralph Gracie at a good time, eventually becoming a black belt under Ralph.

Camarillo developed his unique system by combining judo with jiu jitsu. His big insight was developing a system of throws the segued directly into submissions on the ground. He also became a master of flying attacks.

I might supplement this book with Karo Parisyan's Judo for MMA as Karo spends a lot of time discussing the adaptations he's made to the traditional gi grips to make judo throws work in MMA. If you've already got that one, Camarillo's book is a good enhancer because of his emphasis on transitioning directly from the throw to a submission.

Camarillo comes from the camp that believes that learning to grapple with a gi on is so much more technically demanding than no-gi grappling, that you should train with a gi, even if you intend to fight MMA later on. He makes a strong case and points to numerous MMA fighters who developed their ground game by training with gi's -- B.J. Penn, Karo Parisyan, the Gracies, etc.

Camarillo emphasizes what he calls "impact control positions", that is how to make sure that when you throw your opponent that you both land in such a way that its easy to finish with a submission.

The sexiest part of the book is easily the 1/3 devoted to flying attacks. Flying triangles, flying armbars, even flying omaplatas. This is some crazy stuff and I hope that many fighters are out there reading this book and learning his tricks. I've seen video of Camarillo using these moves in judo and jiu jitsu competition and believe that much of his principles can be applied in MMA.

Production-wise this is a very high quality book, excellent color photos, clear step-by-step instructions, concise easy to understand text. The book also flows together as a narrative and should really be read and trained with in order.

All in all this is a most interesting MMA book by a very innovative grappler. I look forward to seeing Camarillo's tactics become more widely adopted in MMA, the sport will be richer for it.

UPDATE: Just got a note from Erich Krauss to tell me that he's working on a new book with Dave Camarillo just on armlocks. That should be interesting as Camarillo has a very unique way of applying armlocks (he doesn't grab the wrist with his hands, instead he uses his forearms like you would with a rear naked choke). Dave and Erich are also both co-writers on the upcoming B.J. Penn's Closed Guard. Erich also has another one on the way -- Matt Lindland's Dirty Boxing.