Share All sharing options for: Pouring on the Chuck Liddell Hard Sell 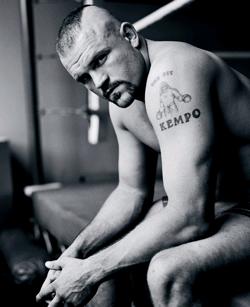 Dana White may claim his comments were blown out of proportion, but the UFC is now hyping UFC 97 as potentially the last Chuck Liddell fight ever.  It's probably too late, but this ad they put out is extremely effective.

I still don't know what to think of Chuck Liddell in 2009.  There's an obvious argument he has declined: he lost 3 of 4, and hasn't knocked someone out since Tito in 2006.  On the other hand, I'm more persuaded by the argument that all his time in the spotlight gave people the chance to figure him out, and hard hitters were able to exploit those weaknesses.

If it is more the latter than the former, then Chuck Liddell can still make another run.  He can adjust his game and try to plug the holes.  Nobody doubts he has the tools to win in this sport.  However, if it really is his age, and his chin and reflexes really are shot, then there's not much he can do.

I've been watching Chuck fights again all week, and I don't really think he's slower on the draw now than he used to be.  I just think he's fighting guys who are a lot faster on the draw and a lot more powerful.  It's easy to make defensive striking mistakes and get away with it against Babalu and Tito Ortiz, not so much against Quinton Jackson and Rashad Evans.

His new camp has supposedly been focused a lot on boxing defense, and so has Shogun's.  It will be interesting to see if they bring out any new tricks, or if this turns into a wild brawl within the first few minutes.

Personally, I have a hard time believing this is the last time we'll see Chuck Liddell in the octagon.