We're taking a slightly different format this month.  Instead of breaking down the televised fights, we look at the two main events and two other fights on the card that I think have some value or are interesting in one way or or another. 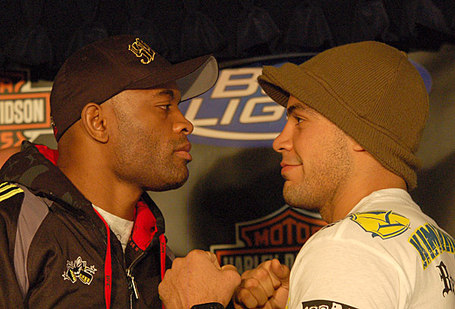 Mike Chiappetta recently twittered, "Is it me or is Silva/Leites starting to give off the same vibe as Serra/St. Pierre I?"  I quickly responded, "Feels more like Fedor/Choi."

To be fair, the UFC 97 main event should prove to be much more competitive than the New Year's freak show.  And Mike's comparison to Serra/St. Pierre I is fair in the sense that Leites may be the most undeserving challenger since Matt Serra.

Leites' best win is a fight he lost (the fight with Marquardt).  His only other encounter with a top fighter - Martin Kampmann - he ended up on the losing end.  He took a pretty bad beating in that fight as well.  Outside of those, we have victories over Pete Sell, Floyd Sword, Ryan Jensen, and Drew McFedries - not exactly the cream of the crop.

Silva's path in the Octagon has been documented well.  Dominant wins over Rich Franklin, Dan Henderson, and Nate Marquardt have vaulted him to the top of pound-for-pound lists everywhere.  A win on Saturday gives Silva 9 straight victories in the Octagon which would be a new UFC record.

For Leites to beat Silva, he needs to break through Silva's defenses, establish effective top control, and submit him.  While he has power, Anderson's chin and defensive skills are legendary.  And Thales simply doesn't possess enough talent to survive (and win) a five round fight.

He also needs the submission early.  Thales has shown in the Kampmann and Marquardt fights that he can take a beating and continue fighting.  However, he slowed down considerably after being hurt in both fights.  His movements wavered, his striking power diminished, and his wrestling particularly became ineffective.

Getting Silva to the floor is no easy task either.  Much has been made of Anderson's takedown defense, but I think a lot of it is overstated.  In the UFC, Silva has ended up on his back because he's not afraid to give up position when he's striking.  When presented with a straight shot or having been pressed up against the cage, Anderson defends well especially when it comes to utilizing underhooks to keep his opponent vertical.

For those not afraid to lay a little chalk, I think there's still some value in Anderson at the current lines.  For those considering the underdog play, I think you're on the wrong side unless this line hits somewhere between +750 and +800 unless you know Leites will step into the Octagon with a considerably improved skill set. 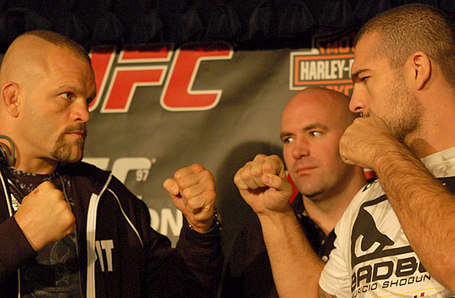 "If Chuck loses on Saturday, he will retire."

And with that quote, Dana White declared the first semi-official half-loser-leaves-town fight in the UFC.  At 39 years of age and on the losing end of 3 of his last 4 bouts, it's hard to deny that Liddell's on the tail end of his career.  But does he really need to be put on the hot seat?

Liddell's problems stem more from the evolution of the game around him than any sort of noticeable physical deterioration from age or sustained punishment.  His two stoppage losses have come to younger, faster, stronger, and more well-rounded fighters in their primes.  And while Mauricio "Shogun" Rua should fall into the same category as Quinton Jackson and Rashad Evans, Chuck's best strengths should be able to overcome the Brazilian in this fight.

"Shogun"'s struggles have been well-publicized.  The once dominant and exciting superstar in Pride hasn't lived up to his the potential he once showed upon entering the UFC.  You can attribute part of the blame on a twice injured knee which required two surgeries between the Griffin and Coleman fights.

Even at 100%, a fight with Liddell poses a stifling stylistic matchup.  While his overrated striking may be overstated at this point, it's the top game where Rua is at his best.

Second, Liddell possesses an elite ability to keep the fighting standing as much as possible.  In addition, while Rua scored takedowns on a much-bigger Forrest Griffin, Chuck is just as big and much more athletic.  And with his cardio in question, if Rua can't bring the fight to the floor and keep it there early, the fight will be contested on the feet.

For all his holes standing, Liddell should hold a sizable advantage in the striking department.  His knockout power and straight punching should prove fatal to the wild Muay Thai of Rua.  Rua's best bet will be to close the distance, grab a Thai clinch, and throw a bevy of knees to the body.  Again, however, Liddell's size and strength makes this an unenviable task.

The line on Liddell has hovered between -190 and -205 the past few weeks.  I still think there's value there.  You may want to wait until Saturday afternoon as Liddell lines generally tend to fade against him near fight time.

First off, thanks go out to Joe Silva and Dana White for giving me an excuse to watch a couple of Demian Maia fights.

This line opened with Quarry inserted as the favorite, and I'm not entirely sure why.  To put it nicely, Quarry's old, stiff, lumbering, lacking technique, and injury ridden.  Outside of his debacle with Kalib Starnes, I've never thought to myself, "Nate Quarry's a pretty good fighter."

Not that one should confuse Jason MacDonald with a high level fighter either.  However, MacDonald's only 33 year old, is plenty athletic, and has shown flashes of brilliance (his ground work in the Demian Maia fight, for instance).

In a fight where both fighters are similarly skilled, those peripheral attributes like size, speed, age, etc. come into play.  I like MacDonald in the fight up to -150.

I looked into this fight because I had read that someone had watched tape on both guys and came out more impressed with Matt Wiman.  After watching tape myself, I came to the opposite conclusion.
In three of his fights (Miller, Fisher, and Omigawa), Wiman endured strike after strike without any sense of urgency to defend himself.  The best example takes places in the Omigawa fight as he pushes forward, hands down, as his head snaps back time and again from Omigawa's jabs.
This should prove to be his downfall in this fight.  A product of Shawn Tompkins, Stout should be able to utilize his cleaner footwork and crisper striking to land at will against Wiman.  I like Stout up to -140 or so.