The Return of David Loiseau

Share All sharing options for: The Return of David Loiseau 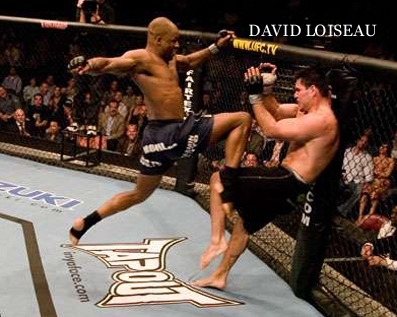 I remember his bloody win over Evan Tanner like it was yesterday. And for a while, I didn't think we'd see The Crow ever return to the UFC. But, in true fighting spirit, Loiseau has earned a shot at redemption:

What made it even worse was that every time Loiseau showed up to UFC events, either on his own or with teammates like welterweight champion Georges St-Pierre, he would feel the energy and excitement, watch himself on a pre-event highlight reel, sign autographs until his hands got sore, and then watch the Canadians he either came in with or paved the way for – St-Pierre, Day, Patrick Cote, Jason MacDonald, Sam Stout – do their thing in the Octagon. But when the door shut, he was on the outside looking in. It should have been a crushing blow. Loiseau didn’t take it as such, instead using his nights in arenas around North America as fuel for one final run.

"It was actually motivating, and wasn’t tough at all," said Loiseau. "It was exciting, and when I see my teammates fighting and doing so well, it inspires me to work hard. And when you work hard and you’re disciplined and you don’t cut corners, the doors will open eventually."

Less than two months after his three round split decision loss to Day, Loiseau returned to action with a three round win over Todd Gouwenberg. In June of last year he knocked out Andrew Buckland, and he closed out the year with a fifth round TKO of The Ultimate Fighter three’s Solomon Hutcherson in September. For the first time since he ran up the middleweight ranks in 2005, Loiseau had a three fight winning streak, and though he wasn’t taking on a Murderers’ Row in terms of opposition, he finally began showing glimpses of the fighter that once headlined UFC events.

His fight against Herman is arguably his most difficult to date (since being dropped by the UFC). And Herman is in a position to suffer the same fate Loiseau did just three years ago should he drop this fight. Here's to hoping the best man wins, but a second opportunity for The Crow wouldn't be the world's worst outcome.