What Oscar De La Hoya Has Meant for Boxing

Share All sharing options for: What Oscar De La Hoya Has Meant for Boxing 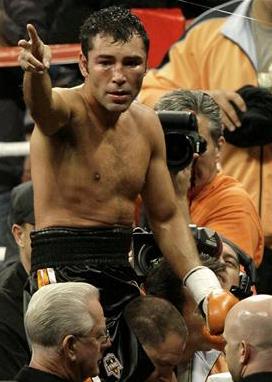 Scott Christ underscores what a unique and celebrated figure DLH's been:

What he leaves behind even more than just a good ring career (39-6, 30 KO) is an unparalleled record as a drawing card. No other non-heavyweight in history even comes close to what Oscar did as a phenomenon of the sport. He's the biggest mainstream crossover of the last two decades. He set the all-time record for boxing buys on pay-per-view for his clash with Floyd Mayweather Jr. in 2007, as 2.4 million people bought the fight, destroying the record set by the Evander Holyfield-Mike Tyson rematch (1.99 million). Oscar's final fight, against Pacquiao, was bought by 1.25 million in a bad economy. De la Hoya himself made $52 million for the Mayweather bout, the biggest purse in boxing history.

He will -- fair or not -- be remembered by many boxing fans for his failures to beat Pacquiao, Felix Trinidad, Shane Mosley, Bernard Hopkins, and Mayweather in the final stretch of his career. But personally I'll remember Oscar as an immeasurable help to the sport of boxing from 1992 through 2008. He came into the sport a superstar Olympian, and he leaves it having done more financially than any fighter ever has. He even changed the rules of major promotion in America. No one should forget that Golden Boy Promotions started with many people scoffing at the idea; because of his success, it seems every fighter at least has some prop promotional company (Jeff Lacy, Joe Calzaghe, Ricky Hatton, Roy Jones Jr., Floyd Mayweather, and so on). But none of them have come close to what Oscar, Richard Schaefer and the other fighter-promoters have done with Golden Boy. And they probably never will.