Share All sharing options for: The Fundamentals Favor Chuck Liddell 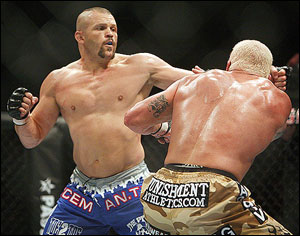 UFC 97 is headlined by Anderson Silva's title defense agains Thales Leites, but the main attraction on the show is Chuck Liddell's fight with Shogun.  A few years ago, this fight was debated over and over among hardcore fans.  Pride stalwarts considered the idea of Chuck beating Shogun impossible; UFC fans believed in Chuck's invincibility.

Today, there is no doubt both fighters are on the decline.  But where Chuck looks a step or two slower than he used to, Shogun looks like a completely different fighter.  Far from improving his terrible performance against Forrest Griffin, he actually looked even worse against Coleman.

Shogun's standup abilities have been overblown since his dominant win over Quinton, but his strength has always been his top game.  His muay thai is good from an offensive perspective, but he leaves a lot of openings.  Mark Coleman was hurt the entire fight and completely gassed, but he still managed to tag Shogun with his back against the fence.  If this fight proceeds like the last, with Shogun moving forward while Chuck picks his shots from against the fence, Shogun is going to lose in the first round.

Shogun is not a dumb fighter though, and you have to figure he knows that he is doomed if he fights that way.  Still, it's hard to see any advantage for Shogun outside of leg kicks.  He probably can't take Chuck down, and I don't see him having any success at all in the clinch given Chuck's strength.  He needs to turn this into a technical, slow standing fight, and I've never seen Shogun fight that way.

Dana White may say he needs Chuck to "dazzle" him, but he also provided Chuck with a perfect style match.  If Shogun shows up like he has the last two times, and Chuck can't win, then it really is time to call it quits.

Both fighters have a ton on the line here, and it feels like December 2007 again when both Chuck and Wanderlei were in must-win positions.  People thought Chuck would have to retire if he lost, and there will surely be similar claims if he loses here.  The bright side for fans is that Chuck responded to desperation at UFC 79 with a great performance, desperation doesn't lead to timidity for Liddell, and I don't think Shogun will be timid either.  I think it really will be an all-out war, only this time I don't think the fight goes to decision.  I think this is Chuck's fight to lose.