Share All sharing options for: Chuck Liddell Training With Danillo Villefort at ATT 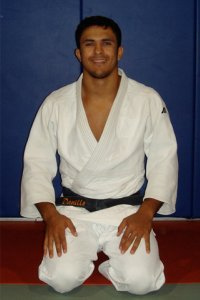 ...the one-time Brazilian jiu-jitsu world champion was invited to help train Liddell in advance of his UFC 97 showdown with Mauricio "Shogun" Rua this Saturday at the Bell Centre in Montreal.

"He’s a good friend of Chuck’s coach, John Hackleman," Villefort said. "John needed someone to help him on the ground. Liborio invited me, and I accepted immediately. Chuck’s a legend in MMA."
...
"One thing that really impressed me was the professional way he takes care of his diet," he said. "Before coming here, I thought Gesias [Cavalcante] was the master in that aspect, but Chuck is the most impressive I’ve ever seen in my whole life. His diet is totally natural. He has a nutritionist who takes care of his diet for the whole week. When I told American Top Team people about it, they didn’t think I was serious. Because of Chuck’s natural belly, many people have the wrong idea about him, but this guy is a real example of how a professional should behave."

Villefort signed with the WEC before the collapse of their middle and welterweight divisions. Apparently he'll be fighting for the UFC but not clear at which weight. Villefort's father is Master Francisco Pereira da Silva, also known as Master Indio, "a legendary fighter in Brazil with more than 280 vale-tudo fights." Anyone with more info on Master Indio please post it in the comments. I know he had a judo background but also trained jiu jitsu.