Share All sharing options for: The Week in Quotes: April 5th - April 11th 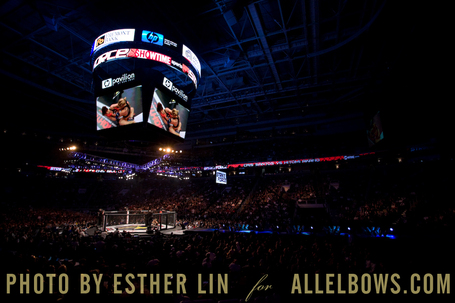 THE ONE WITH THE SKELETON MUSCULAR DIAGRAMS

"He’s not a legend to me. Back in the day he was fighting fixed matches in Japan and supplementing himself with who knows what. Before that he was in a California Youth Prison for robbing houses. If that’s your idea of a legend you might want to reassess your thinking."  - Diaz, before his fight with Frank Shamrock.  (MMA Fiend)

"I felt like I was watching money disappear." - Former UFC light heavyweight champ Tito Ortiz on his thoughts during the Shamrock-Diaz bout. (Yahoo)

"Nick kicked my ass tonight; there’s no two ways about it." - Shamrock (ESPN)

"I don’t really want to say what the deal is...but their gym will have a much better relationship with Strikeforce than just one fighter." - Strikeforce CEO Scott Coker giving Hitomi Akano an early Easter basket after Cris Cyborg's failure to make weight Friday. (MMA Weekly)

CRAZY THINGS YOU SAY WHEN YOU'RE PUNCH DRUNK VOL. 1

"I saw him about three different times. I didn’t know what I was doing."  - Scott Smith, on getting rocked by Benji Radach. (MMA Mania)

"I’ve got to thank my masseuse, Tom Atencio, thank you very much." - Smith shedding light on Tom Atencio's post-MMA plans.

QUOTES YOU THOUGHT WOULD BE FROM MICKEY ROURKE VOL. 1

"Realistically, I shouldn’t be working there." - Brett Rogers, who had to take a job changing tires at Sam's Club following EliteXC's demise. (MMA Weekly)

"I was an electrician and I trained at night, you know, and it just takes so much out of you that you don’t even really enjoy it anymore." - Benji Radach. Getting KO'd by Danny LaFever will do that too. (MMA Fiend)

THE CHURCH OF LATTER-DAY GRIFFINS

"I think he'd be a Forrest Griffin type. Vicious but yet forgiving." - Tom Skiles, head of the Spirit of St. Louis Church, on Jesus.  Nothing like describing "the savior" as "vicious." (Riverfront Times)

"I think Jesus was a man's man. Him and his disciples. I tell people they probably had teeth missing." - Skiles

"I just want to tell him, ‘Sempai (Japanese for one’s senior or elder], you are strong.’" - WAMMA lightweight champ Shinya Aoki, on his destruction at the hands of Hayato "Mach" Sakurai. (Sherdog)

"Ultimately, I want to fight Fedor. If DREAM could set that up it would be great." - Jeff Monson, lamb for slaughter. (FIghers Only)