Is Frank Shamrock Finished as a Headliner?

Share All sharing options for: Is Frank Shamrock Finished as a Headliner? 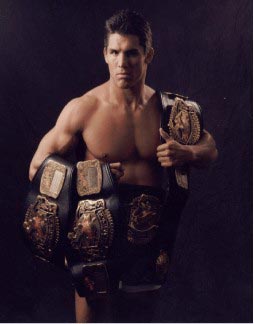 It might have been the final curtain for one of MMA’s all-time greats. Shamrock, whose ability to sell fights is a big reason Strikeforce can be the long term No. 2 MMA promotion in North America behind UFC, couldn’t hang with Diaz in the show’s main event, likely making him the last of the original pioneers of the sport to fall from major event headliner status.
...

It was both a happy and sad night for promoter Scott Coker, who called the event a grand slam success, but sensed the guy who paved the way for all this to happen may have fought his last big-time fight.

“It’s sad because Frank is my friend and he and his wife are my social friends,” said Coker, whose initial success in promoting MMA came March 10, 2006, when Shamrock knocked out Cesar Gracie at the HP Pavilion before a sellout of 18,265 fans.
...

One of the most unhappy spectators during the match was Tito Ortiz, the loser of Shamrock’s most legendary match, a UFC middleweight championship match ten years ago. Ortiz was hoping to avenge that loss in a ten-year anniversary of the match later this year.

“I felt like I was watching money disappear,” said Ortiz, who has not signed with Strikeforce.

Shamrock vs Ortiz wasn't the only big money rematch to lose its luster with Shamrock's TKO loss. Coker and Strikeforce will now need to find a money opponent for Cung Le's return. I wonder if Robbie Lawler will be that man.

There’s still plenty of entertaining fights out the for him to take. Frank Trigg seemed like he was angling for a fight with Shamrock last week. Royce Gracie was hanging out at the Strikeforce press conference too. And I expect Tito Ortiz to do poorly enough that a rematch can still happen. Last but not least if Frank keeps losing he might eventually get to the point where a Ken Shamrock fight is competitive again! Hah, just kidding. One would hope Frank would retire before then.

At this point it’s time to lay to rest the idea that Frank is still able to keep up with the next generation. If he’s still got it, he hasn’t shown it in his last two fights. I used to think he dicked around and lost the Cung Le fight on purpose but after seeing him struggle with Nick, I’ve had to re-evaluate that assumption. There’s still a few great fights in Frank Shamrock, for sure. But his days as a champion are done now.

I must say the possibility of a Frank vs Frank match between Shamrock and Trigg is intriguing and could position the winner for a run at Cung Le and Robbie Lawler at the top of the division. Or even Jake Shield at the top of the welterweight division. Frank Shamrock at 170? Maybe. That would be a good weight for an utterly pointless but money fight with Royce Gracie.