Share All sharing options for: Strikeforce Notes and Thoughts 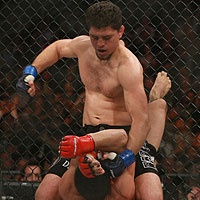 I attended Strikeforce live tonight as well as the post-fight press conference, and I came away extremely optimistic about this promotion's future.  Over 15,000 fans ($750k gate) packed the arena, and were enthusiastic for everything.  None of the fights were super meaningful in the rankings context, but the show was a ton of fun, and Scott Smith's emotional win made it a special night.

--Alistair Overeem and Fabricio Werdum talked up a fight at the presser, and while it is not confirmed we could see those two fight each other as soon as June.  Werdum promised to take another arm with him.

--Tito Ortiz made it very clear he wants to fight for Strikeforce.  He is waiting for the UFC's first right of refusal to expire (which it does in May), and then he would ideally return in the fall.  He has just started weight training again, and trash talked Babalu a bit.  He admitted he was depressed Frank lost because it was "money out the window."

--The Gina Carano deal is almost done, and Coker wants to main event their August show with Carano v. Cyborg for a Strikeforce women's title.  No word on the weight.

--Scott Coker is open to bringing in Affliction fighters, and as of now there is no formal relationship with WAMMA.

--Strikeforce signed Kevin Randleman, who will be back in action soon.  He also had the quote of the night:

--Finally, back to Scott Smith.  Many fighters including Smith have had serious financial problems without being able to work since Elite went down, and for him to come back and win like this tonight was really a great moment.  His kids getting in the cage was great too.