Strikeforce: Shamrock vs. Diaz Live Results and Commentary for the Undercard

Share All sharing options for: Strikeforce: Shamrock vs. Diaz Live Results and Commentary for the Undercard 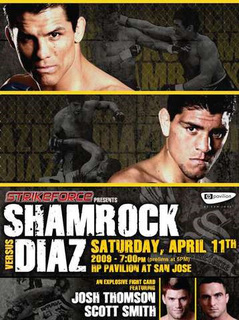 I will be live in San Jose to cover the undercard and anything else going on in the arena.  When the main show starts, I will hand the baton off to Brent Brookhouse, who will do live coverage from that point on.

Undercard coverage begins at approximately 5:00pm PST.  The coverage for the main card will be in a separate post above this one.

I'm now in the arena, the prelims supposedly start in 20 minutes or so.  Cung Le is here with a smoking blonde, Royce Gracie is doing autographs, and I see a chair reserved for Mickey Rourke.  There's a huge amount of people lined up, the arena should be packed by the time the live broadcast starts.

Round 1: Kohara is making his pro debut, Tavares is a local. Tavaes works for a takedown, but Kohara stuffs and ends up on top. Kohara gets his back, but Tavares reverses and moves into top control...only to almost get armbarred! He pulls out, and he's on top again. Kohara almost gets another armbar, but Tavares fights his way out. Neither guy is really good but this is pretty entertaining. Tavares ends the round on top raining down blows from guard. Really close, I'm going to give it to Kohara for the sub attempts, but I honestly think the judges will give it to Tavares. Bloody Elbow score: 10-9 Kohara.

Round 2:  Holy fuck, Kohara knocks him out right away with a knee to the head as Tavares was shooting in..  I missed it it happened so fast.  Kohara gets the knockout at :04 of round 2.

Round 1: Bucio leads with kicks, and Terry moves into the clinch and gets him down.  Terry goes for a triangle, so Bucio just stands up out of it.  Terry slams his way into side control.  Terry lands some punches from the top as the round ends, but most miss.  Bloody Elbow scores the bout 10-9 for James Terry.

Round 2:  They start the round  off with some kickboxing, but neither guy is doing much.  Bucio landing some kicks, so Terry takes him down.  Bucio can't stop the takedown.  Terry slams his way out of an armbar attempt and ends up in side control.  Big John stands it up from guard after a lot of inactivity.  Terry scores another takedown to take the round.  Bloody Elbow scores the round 10-9 for James Terry.

Round 3:  Nice right hand from Terry early, and he lands a number of strikes.  God damn, I don't know why the site is bolding everything I write.  Is it just me or is everyone seeing this?  Bucio finally stops a takedown, and he basically has a couple minutes to knock Terry out or he's going to lose this fight.  He gets taken down again.  Bloody Elbow scores the round 10-9 for James Terry.

Official score: 30-27 James Terry across the board.

Tito Ortiz is here.  What a nice guy, just signed an autograph.  The ring announcer is retarded, read off the wrong winner while everyone yelled at him.  Oh well, at least it was on the untelevised portion.

Brandon Michaels v. Raul Castillo:  Brandon Michaels looks like a convict.  Castillo is a local out of AKA.  And just like that, he gets a takedown.  Castillo moves into mount, reigns down punches, takes Michaels' back, and grabs the choke.  Castillo wins via submission at 1:45 of the first round.

Waylon Kennell v. Eric Lawson:  Lawson is a popular local.  See a trend?  Overhand right from Kennell clips Lawson.  They trade big blows in the clinch, wow.  Kennell hits a nice uppercut inside.  Lawson gets a takedown from a psuedo judo throw to the crowd's approval.  Lawson drops him with an inside uppercut, but can't finish him on the ground.  Kennell has no technique but a lot of power.  Another huge exchange that Kennell wins.  It goes to the ground, and Kennell ends up in mount.  he get what looks like a fully extended armbar, everyone thinks it's over, but Lawson's not tapping!  Kennell doesn't have him trapped, Lawson gets out, spins into mount, and finishes the fight! Man, neither guy looked "good," but this was a hell of an entertaining round from a live perspective.  In terms of skill, both looked like beginners, but both also showed a ton of heart.

Round 1:  Luke is throwing a lot of kicks to start.  He gets a nice body-lock takedown.  Luke takes his back, and is fighting for a choke.  A Showtime camera is filming Tito.  They fight and fight on the ground, and Luke finally gets the choke for the win.  Luke Rockhold wins via submission at 4:07 of the first round.