Cyborg-Akano Fight in Jeopardy; UPDATE: Fight Is Reportedly Back on After Initial Cancellation

Share All sharing options for: Cyborg-Akano Fight in Jeopardy; UPDATE: Fight Is Reportedly Back on After Initial Cancellation 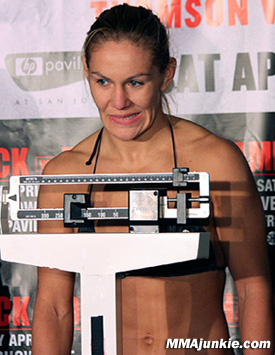 However, Akano's side refused to accept the fight, because Cyborg's weight being more than 145 pounds violated the contract.  Akano, by weighing in under 145 (at 143.5) had fulfilled her end and thus would be getting her contracted money whether she fought or not.  However, there is still ongoing discussion to rectify the situation and come to an agreement with Akano's side.  The fight was thought to be dead at 8:30 p.m., but negotiations have continued and nothing is yet final.

I honestly have a hard time believing this fight won't happen.  I think they'll just have to pay Akano more to take it.  It would be a shame to lose this fight too, but who could blame Akano for not wanting to fight someone so much bigger than her.

Update:  Greg Savage reports the fight is off at Sherdog:

Strikeforce officials and the two fighters’ camps negotiated to try and keep the bout in play on Friday night, but to no avail.

Akano’s manager, Shu Hirata, told Sherdog.com that the promotion offered to pay Akano her win bonus regardless of the fight’s outcome, along with two more bouts guaranteed on her contract.

Hirata said Akano’s decision was about more than the money though.

"Gina [Carano] never makes weight, but they make everybody fight. It's not fair," said Hirata. "I think it’s really about time that we have to set the precedent that you should really make the weight."

This is a shocking and disappointing turn of events.  Many fans were excited to see Cyborg fight, and from the promotional side this fight was intended to build to a return for Gina Carano.

I completely understand the principle behind the decision, but I question her management.  This was always going to be a tough fight for Akano, everyone knew it was a setup for her to get knocked out.  To turn down that money and probably guarantee she is never asked back to Strikeforce just to stand up for a principle is a big sacrifice.  Or is it?  The fact that they sat there negotiating for hours over money suggests to me that they wanted more and Strikeforce wouldn't pay it.

I don't know what Akano's pay or bonus schedule is, but if she's on some kind of 5/5 contract then the offer wasn't really that much.  I suppose we'll find out more in the days to come.

The fight is back on:

A featured women’s bout between Cristiane "Cyborg" Santos and Hitomi Akano is now back on the line-up at Strikeforce "Shamrock vs. Diaz" this Saturday at the HP Pavilion in San Jose, Calif.

"I don’t really want to say what the deal is but I think that, let’s put it this way [her] gym will have a much better relationship with Strikeforce than just one fighter," said Coker.

"All I can say is that Strikeforce and Mr. Coker offered her something very reasonable and we appreciate his effort as well," said Hirata at the conclusion of negotiations at 2 a.m. PST. "Of course as a fighter she always wants to fight but she wanted to get the right conditions to make that happen, that’s all."

"We felt that maybe fans and [the] public should know what really happened, and by her fighting it relayed more of a message to the public and also gives her credit for having the heart of a warrior, because she will step in even though it is a big disadvantage now," stated Akano’s manager. "I asked Mr. Coker to do that and he promised it will be addressed on the broadcast and I think it’s important to tell the story behind it."