Bloody Elbow Judo Chop: Getting Inside With Takeya Mizugaki

This Bloody Elbow Judo Chop discusses the inside boxing technique of Takeya Mizugaki in his championship bout with Miguel Torres at WEC 40.

Share All sharing options for: Bloody Elbow Judo Chop: Getting Inside With Takeya Mizugaki 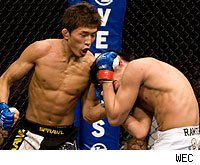 When Takeya Mizugaki was announced as a late replacement for top WEC bantamweight contender Brian Bowles, most expected him to be quickly snuffed out by champ Miguel Torres.

But Mizugaki shocked everyone by going the distance with Torres, and even beating the champ in the first and third rounds on some score cards.

For this Judo Chop I want to talk about the techniques Mizugaki used to get in close where he could nullify Torres' reach advantage and employ his close-range boxing skills to good effect. Mizugaki also used the thai clinch effectively to land knees in the clinch.

Mizugaki talked about this before the fight with Sherdog:

"One thing in particular I've also been working on is striking distance," Mizugaki said. "In Japan, striking often happens in close, but abroad it seems that most Japanese fighters get knocked out from a distance, in particular with the straight punch. I've worked to adapt myself to that distance."

He did indeed. He also did a great job of avoiding bad habits he'd indulged in previous fights, keeping his hands up and chin down to protect himself from the bombs Torres throws at range.

In the full entry I dig into a few gifs from the fight. In a sequel Judo Chop, I'll discuss the techniques Torres used to pull out the win.

The gif on the right shows how Mizugaki came over a lazy straight kick from Torres to land a series of punches to Torres' head.

Miz catches Torres' rear right leg with his own lead left hand and goes over the top with a straight right followed by a left hook and a right hook. None of the shots landed completely clean, but they all three scored and forced Torres to back away without firing back.

In the gif on the left, Mizugaki ducks a jab from Torres, steps in, throws a left-right combo to the body then moves upstairs to throw a four punch combo. Again, not every shot lands, but at least two of the shots (a left hook to the body and a right hook to the head) land cleanly and Torres is forced to duck and cover and bounce into the fence.

Slipping a lead punch, driving in and firing off rapid unanswered combinations is the essence of good boxing technique. What Mizugaki was doing in this fight is several steps beyond the boxing we usually see in MMA. Unfortunately for Mizugaki, Torres had the answers.

We'll discuss that in my next Judo Chop.

To close this one out I'm including the post fight interview with Torres where he discusses what Mizugaki did well. He particularly praised his chin and toughness.