Share All sharing options for: "KID" Yamamoto vs. Joe Warren at DREAM.9 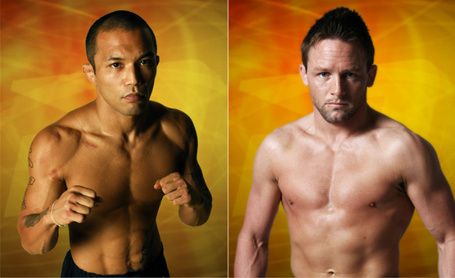 Yes, really. One of the greatest featherweights of our time against a 1-0 wrestling convert.

Here are the pairings for the second round of DREAM's Featherweight Grand Prix:

Apparently Daiki "DJ.Taiki" Hata's eye was too injured and Hideo Tokoro will take his place.

[UPDATE] A different take from smoogy in the comments:

This is actually the right booking to make. Unlike any of the other competitors, there is a strong angle here: Yamamoto and Warren were both hopefuls for the 2008 Olympics, Yamamoto in Freestyle Wrestling and Warren in Greco-Roman. Warren was actually one of the favorites after winning the 2006 World Championships, but he got busted for pot; meanwhile, Yamamoto was knocked out of Japanese qualifiers by injury.

For the hardcore fans, I think it represents an interesting style choice, because what if Warren can out-muscle Kid up close and control him? It certainly isn’t a tune-up fight for Kid, who hasn’t fought in 15 months.